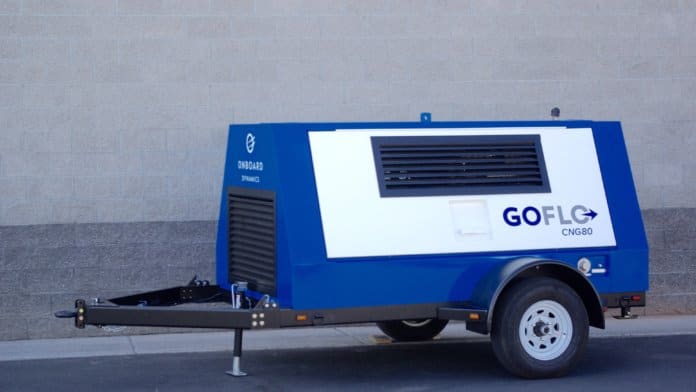 Onboard Dynamics (ObDI), an Oregon-based company focused on compressed natural gas (CNG) refueling solutions, has announced the launch of its GoFlo CNG-80 mobile natural gas compressor for commercial use. To meet the anticipated worldwide demand, ObDI says it has formed a strategic business relationship with Linamar Corp., a diversified global manufacturing company, to provide expanded capabilities as the exclusive manufacturer of the GoFlo product.

According to the company, compression capacity of the GoFlo CNG-80 compressor makes it cost-effective for smaller fleets of CNG vehicles, as well as for the initial deployment of CNG vehicles in larger fleets. Because of the compressor’s modular design, ObDI says fleet operators can expand their CNG vehicle inventory by adding GoFlo units as demand increases, without needing costly electrical upgrades. The self-powered GoFlo compressor is also easy to relocate in the event that a CNG fleet needs to be redeployed, and the unit can serve as a backup to dedicated CNG refueling stations. In addition, the company says the freedom from electricity strengthens the operating reliability of CNG fleets in the event of a natural disaster.

“We believe the lower cost and flexibility of our mobile natural gas compressor will greatly increase the attractiveness of operating vehicles, especially trucks and buses, on clean, abundant, inexpensive domestic natural gas,” says Rita Hansen, CEO of ObDI. “Because it is self-powered, the GoFlo compressor provides cost saving and new capabilities to the CNG industry.”

With the support of the U.S. Department of Energy’s ARPA-E program, the technology on which the GoFlo CNG-80 system is based has been under development for nearly four years. ObDI notes a limited number of GoFlo CNG-80 systems will be available for delivery the second quarter of 2018 before production ramps up the second half of the year.

“Linamar’s manufacturing capabilities, commercialization expertise, and customer relationships are invaluable to our efforts at Onboard Dynamics,” says Hansen. “With its technical know-how rooted in the expertise of McLaren Engineering, the Linamar team has already sped up the timeline for achieving necessary volume capability.”

More information about the GoFlo CNG-80 solution is available here.