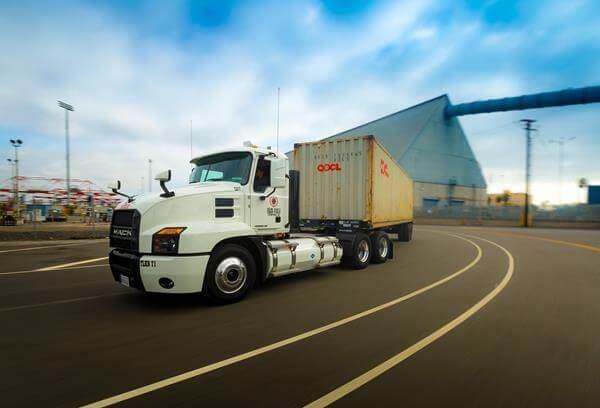 In total, more than 700 natural gas trucks regularly haul freight to and from the two ports, representing approximately 6% of the active drayage truck fleet.

The newly opened Port of Long Beach bridge will serve as a vital part of the country’s trade infrastructure, with 15% of the nation’s imported waterborne cargo trucked over it. The $1.5 billion bridge project was a joint effort of Caltrans and the Port of Long Beach, with additional funding support from the U.S. Department of Transportation and the Los Angeles County Metropolitan Transportation Authority (Metro). The commemorative clean truck parade was organized by the Port of Long Beach and the Harbor Trucking Association, a coalition of intermodal carriers serving the U.S.’ West Coast Ports.

“The clean truck parade demonstrates our members’ commitment to reducing their carbon footprint by investing in sustainable transportation technologies and fuels,” says Weston LaBar, CEO of the Harbor Trucking Association.  “NZE natural gas trucks have already made a measurable impact on emissions from the drayage truck fleet serving the ports of Los Angeles and Long Beach and have played a large role in the success of the ports’ Clean Trucks Program.”

In May, the ports of Long Beach and Los Angeles upgraded NZE heavy-duty natural gas trucks to the highest Technology Readiness Level – TRL 9 – in the Feasibility Assessment for Drayage Trucks. NZE natural gas trucks are the first technology in the Ports’ assessment to achieve the TRL 9 rating.

The fleets in the parade operated natural gas trucks that were factory built by Freightliner, Kenworth, Mack, Peterbilt and Volvo, and are commercially available for purchase across the nation. The heavy-duty, Class 8 trucks feature Cummins Westport’s NZE ISX12N NZE (.02 g NOx / bhp-hr) natural gas engine, which is 90% cleaner than the EPA’s current heavy-duty NOx emission standard. The near-zero ISX12N engine even powers several heavy-duty trucks that operate in the ports’ overweight corridor with a gross vehicle weight rating (GVWR) of up to 96,000 pounds, providing comparable operating capabilities as its diesel counterparts.

Each day, more than 17,000 drayage trucks haul freight to and from the Ports of Los Angeles and Long Beach – nearly 40% of the nation’s total containerized import traffic and 25% of its total exports combined. Heavy-duty diesel trucks are one of the largest sources of emissions in Southern California, contributing to the region’s consistently poor air quality – the worst in the nation.

Several of the fleets that participated in the parade have received incentive funds from the South Coast Air Quality Management District (AQMD) or other programs in California to accelerate their fleet turnover. Southern California only has until the end of 2022 to significantly cut ozone-forming NOx emissions in order to reach minimum standards set by the federal government for clean and healthy air, known as National Ambient Air Quality Standards, or NAAQs. Failure to meet these federal air quality standards can trigger fines and penalties, including withholding billions of dollars of federal highway funds.

To learn more about how NZE natural gas trucks fueled by RNG offer one of the best options to help California achieve clean air and climate change mitigation as quickly, effectively and efficiently as possible, click here.