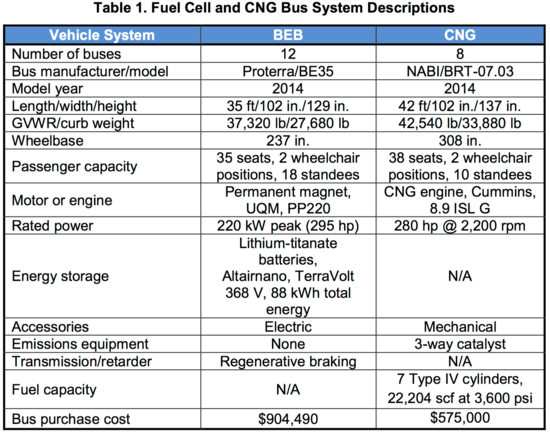 A report from the National Renewable Energy Laboratory (NREL) found that Proterra’s battery-electric buses (BEBs) were nearly four-times more fuel efficient than their compressed natural gas (CNG) counterparts. The study focuses on a 12-vehicle demonstration by the Foothill Transit Agency in California from April 2014 through July 2015.

The NREL team found that BEBs used, on average, about 2.15 kWh per mile over nearly 400,000 miles of on-road testing. That is the equivalent of about 17.48 miles per diesel gallon equivalent (DGE). NREL selected NABI CNG buses as their baseline comparison vehicle, which they say had an average fuel economy of just 4.51 DGE.

The Proterra BEBs were also more reliable than the baseline CNG buses, measured as miles between roadcalls (MBRC). The BEBs achieved a MBRC of 133,000, which the NREL researchers said was “exceptional for an advanced technology bus in the early stage of commercialization.” During the data period, there were just three roadcalls related to the battery-electric drive system that powers the Proterra buses.

In comparison, the baseline CNG buses had a MBRC of about 45,000, which NREL said is “expected” of a new, fully commercial vehicle.

The BEBs were on the road an average of 13.2 hours per day, receiving a 20 kWh recharge about 13 times a day. However, the Proterra BEBs have a price tag of $904,000 each, compared with $575,000 for the baseline CNG bus. NREL plans to continue evaluating the in-service performance of the Proterra BEBs for another year before publishing another report.

Ed – good points. This shows how NREL’s is a cheerleader for EV’s and has a huge anti-fossil fuel bias. If you’re looking at MPG/ MPGGE you have to calculate the BTU’s required to generate the 2.15 kWh per mile – you have to factor in the inefficiencies and loss at the turbine; transmission and battery loss.

Very interesting but it is not fair just to say 4X more fuel efficient. The way NREL did this calculation they just took the “energy equivalence” of the onboard fuel so 37.7 kWh = 1 gallon diesel. So yes, the electric bus uses 1/4th the onboard energy comparing BTU’s used from a diesel tank vs a lithium battery. That is not a surprise considering we know that gas/diesel engines are not efficient compared to emotor-inverters. But when you do the analysis this way you also need to compare the equivalent $/gallon. With 37.7 kWh/gallon diesel and $0.18/kWh (the figure they… Read more »

Great article. Is there any data for diesel buses in miles per DGE? Should it just be 1 mile per DGE? And therefore are electric buses 17 times more efficient than diesel buses??

Thanks for covering this story, NGT. Very interesting information. David, 1 diesel gallon contains approximately the same energy (BTU) as a diesel gallon equivalent of either CNG or electricity. It is a shame the chart doesn’t show the same data from a diesel bus, since that is what they are using as their baseline energy measure, but CNG is typically about 10% less fuel efficient than diesel. So a diesel bus would probably be about 5 mpg, and electricity would be about 3.5 times more efficient than diesel. The NREL study is an academic exercise to compare fuel economy (mpg,… Read more »