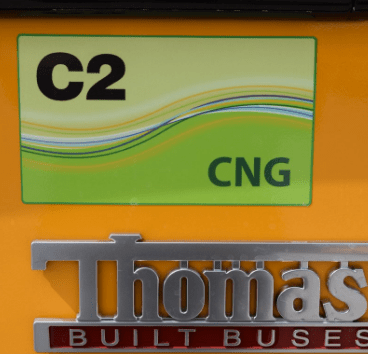 These units, which are the first Type C CNG school buses in the industry, also represent the largest single conversion to CNG in the nation, according to Thomas Built Buses.

Moreover, North Kansas City also purchased 14 Type A Minoutour school buses to round out its fleet.

“We are excited to be the first school district in the country to incorporate Type C compressed natural gas school buses into our fleet,” says Lon Waterman, transportation director of North Kansas City School District. “We strongly believe in the benefits of compressed natural gas, and we look forward to running a cleaner, greener and more cost-effective fleet. Adding the Saf-T-Liner C2 CNG is a milestone for us and the first step to converting our entire fleet to compressed natural gas.”

The district expects to see a reduction of more than 5,000 metric tons of greenhouse-gas emissions with this conversion and an increase of fuel economy from 5.6 mpg with its diesel buses to 8 mpg with the new CNG engines.

“We worked with North Kansas City in 2010 when they purchased their very first compressed natural gas buses, the Saf-T-Liner HDX CNG models,” says Scott Kincaid, Midwest Bus Sales general manager. “Compressed natural gas has proven to be a promising addition to their fleet.”

The overall purchase of these buses, including the capital costs for the school buses, infrastructure and shop improvements, is being financed through Daimler Truck Financial. The company states that no grants or subsidies are being used for this conversion.