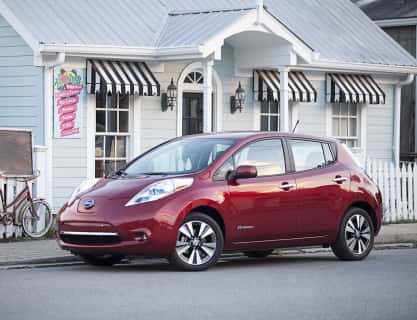 Nissan says it has shattered yet another sales record, having sold 30,200 LEAF all-electric vehicles in 2014. The company claims this represents the first time any plug-in model has sold more than 30,000 units in a single year.

‘Now in its fifth model year, Nissan LEAF is more popular than ever and continues to bring new buyers to Nissan,” says Brendan Jones, director of Nissan EV sales and infrastructure. “From the beginning, our vision was to bring electric vehicles to the mass market in a practical and fun-to-drive package, which is what makes Nissan LEAF the best-selling electric car in the world.”

Nissan says that with seating for up to five passengers, the LEAF offers an EPA-estimated driving range of 84 miles on a fully charged battery and MPGe ratings of 126 city, 101 highway and 114 combined.

According to the company, the starting price of a Nissan LEAF is about $22,000 after the available maximum $7,500 federal tax credit.