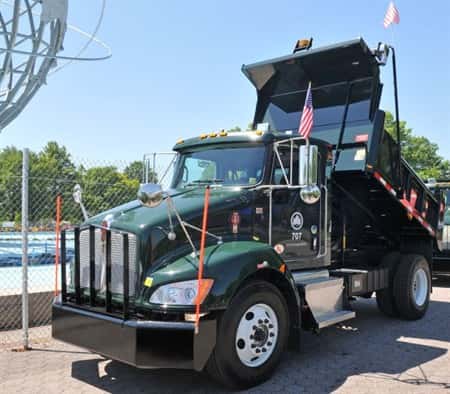 The New York City Department of Transportation (DOT) has ordered a T370 hybrid truck from Kenworth, joining nine Kenworth T270 hybrid bucket trucks already in service with the DOT and many additional hybrid units that are operating in the city's Department of Sanitation and Department of Parks & Recreation.

The city's sanitation department began deploying hybrid Kenworth T370s in 2009 and currently has nine in use as rack trucks. Five other Kenworth T370 hybrids are used as delivery trucks. These vehicles feature the PACCAR PX-6 engine, rated at 240 hp and 560 lb-ft of torque, and the Eaton diesel-electric hybrid power system.

‘We're seeing up to a 30 percent improvement in fuel economy over non-hybrid delivery trucks,’ says Spiro Kattan, supervisor of mechanics for the New York City Department of Sanitation. ‘And the cost of maintenance is pretty close to what we have with our other trucks. We, of course, paid a premium for the hybrids, but they are paying us back by lowering our fuel consumption.’

The parks department is also heavily invested in clean transportation options, with almost three-quarters of its fleet operating on some type of alternative fuel.