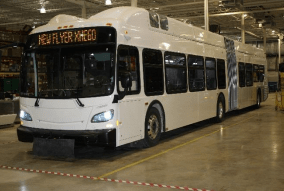 New Flyer of America has conducted the inaugural road demonstration of the Xcelsior XHE60 heavy-duty articulated hydrogen fuel cell transit bus. Representatives from two major transit authorities – Alameda County Transit (AC Transit) of California and the Metro Transit of Minneapolis – were on hand to participate in the vehicle’s debut and demonstration.

Based on the Xcelsior X60 heavy-duty transit bus platform, New Flyer partnered with Ballard Power Systems Inc. and Siemens to develop the hydrogen fuel cell propulsion system. The bus will operate in revenue service by AC Transit for 22 months following the completion of a comprehensive evaluation at the Federal Transit Administration’s (FTA’s) Altoona test facility. Following the tests, New Flyer intends to offer these green hydrogen fuel-cell-electric, 60-foot buses to customers throughout the U.S. and Canada.

The propulsion system includes a combination of batteries, a fuel cell and hydrogen storage that allows the fuel cell to operate at a relative steady state, while the batteries capture braking energy and provide power for bus acceleration. Ballard Power Systems is supplying a fuel cell power plant that it says is smaller, lighter and less expensive than existing models. The bus is targeting a range greater than 250 miles without refueling or recharging.

New Flyer is the sub-recipient of an FTA Grant administered by CALSTART, a nonprofit organization that focuses on clean air technology commercialization with businesses, fleets and the government. The FTA’s National Fuel Cell Bus Program is a cooperative initiative between the government and industry to advance the commercialization of fuel cell technology in U.S. transit buses.

Please describe costs of purchsse in comparison to diesel, natural gas and electric buses with the understanding that this is first generation vehicle should become less expensive over time.