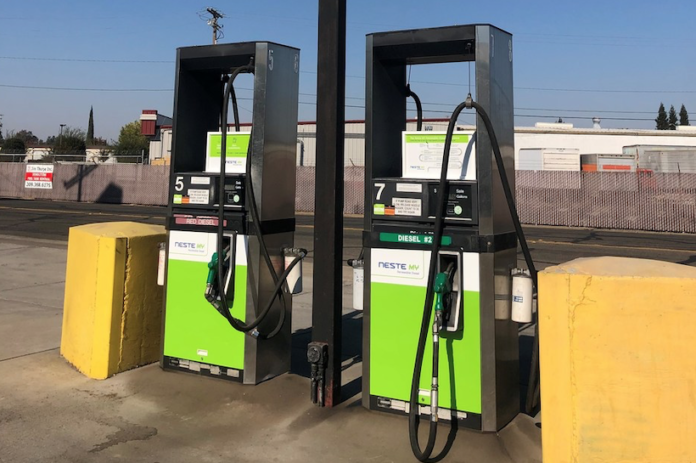 The number of Neste MY Renewable Diesel fueling stations in the state has more than doubled since 2019. The company’s ambition is to create a “green fueling network” across the West Coast – making it even easier for fleet managers to switch to renewable diesel.

Neste says the fueling stations are open 24/7 and offer a seamless and quick customer experience. They are strategically located near major commercial freight routes and are designed to accommodate commercial fleet vehicles of all sizes. The new cardlock locations are operated by Neste’s authorized distributor, Van De Pol Petroleum, increasing the company’s geographical footprint with the opening of these two new sites.

Each location is regularly supplied with Neste MY Renewable Diesel, a low-carbon fuel produced from 100% renewable and sustainable raw materials that cut greenhouse gas emissions by up to 80% compared to petroleum diesel. The two new fueling stations join eight existing Neste-branded fuel stations in San Leandro, San Jose, Keyes, Ripon, Wasco, Buttonwillow and Shafter. Neste has created a resource page to find a nearby fueling station and a certified Neste MY Renewable Diesel distributor.

“Intensified by climate change, wildfires in California have taken lives, upended whole communities and are on track to cause $10 billion in damages,” says Carrie Song, vice president of renewable road transportation at Neste. “This is unacceptable and shows the urgent need for California to drastically reduce greenhouse gas emissions from its transport system.”

Neste MY Renewable Diesel is a California Air Resources Board (CARB) compliant drop-in replacement fuel that’s compatible with all diesel engines and can be integrated into all diesel fuel infrastructures at no extra cost. In fact, many well-known engine makers certify the use of renewable diesel in their engines. CARB has a certified pathway for renewable diesel and has recommended Neste My Renewable Diesel as a CARB replacement.

For more information on Neste’s MY Renewable Diesel, click here.