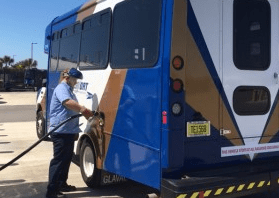 LeeTran, the public transit agency for Lee County, Fla., has added more propane-autogas-fueled shuttles to its paratransit fleet this month for a 20% reduction in fuel costs, according to a ROUSH CleanTech release. Now, with a propane fleet of 20 vehicles, LeeTran says 45% of its paratransit fleet is powered by alternative fuel.

The agency says it plans to switch its entire fleet to propane autogas within the next five years.

“We are converting our vehicles to operate on propane autogas for a number of reasons: It’s an American-made fuel with significant environmental benefits; converting to propane infrastructure is more affordable; and propane autogas offers lower fuels prices,” says Robert Southall, maintenance manager of LeeTran. “Currently, we are paying about 50 cents per gallon for propane autogas compared to about $1.46 for diesel, which is on the rise.”

LeeTran says it provides approximately 4 million rides per year, including over 100,000 passenger trips through its Passport service. The propane autogas paratransit shuttles will be used for shared ride, advanced reservation trips for those who are unable to use regular fixed-route public transportation.

Each of the agency’s passport shuttles, which travel 30,000 miles per year, is built on the Ford E-450 chassis with a 6.8L V10 engine and is equipped with a ROUSH CleanTech propane autogas fuel system with an extended range 64-gallon fuel tank.

“LeeTran wanted to reduce its emissions and operating cost without compromising range for its paratransit fleet. Our extended range fuel tank on the E-450 is exactly what the agency was looking for,” says Todd Mouw, vice president of sales and marketing for ROUSH CleanTech.