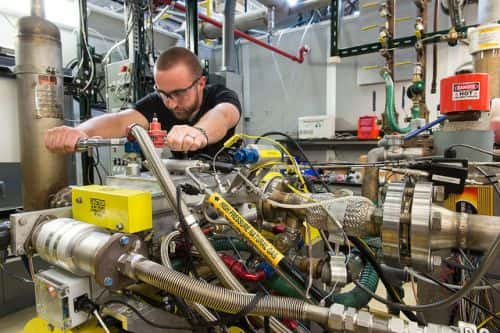 The U.S. Department of Energy's (DOE) Argonne National Laboratory has announced it is working with automakers Ford Motor Co. and FCA US LLC on a study to help boost the efficiency of dual-fuel engines.

According to the lab, the pre-competitive research is focused on exploring technical concepts and development of engine technology that simultaneously uses natural gas and traditional gasoline to maximize the best characteristics of both fuels, while reducing oil consumption and making the most of the recent boom in natural gas supplies in the U.S. Argonne and the automakers are conducting the project under a cooperative research and development agreement.

“The fact that two major players in the auto industry are partnering with Argonne on this project really shows the promise of this approach,” says project director Thomas Wallner. “The assumption here is that if you blend the fuels properly, you can make substantial gains in efficiency.”

Wallner notes vehicles that use both gasoline and natural gas have been around for some time, but what most people think of as a dual-fuel vehicle is actually more of a bi-fuel vehicle. As he explains, bi-fuel vehicles have natural gas and gasoline on board, but they typically use only one fuel at a time. This research will focus solely on engines using both fuels simultaneously.

Ultimately, the project's objective is to understand potential benefits and demonstrate targeted blending of gasoline and natural gas in an engine that uses half as much gasoline and shows a 10% increase in overall efficiency and a 10% improvement in power density.

Argonne says natural gas has much higher resistance to knocking, which is caused when the fuel/air mixture in an engine's cylinder auto-ignites. Mixing natural gas with gasoline would allow the engine to run without fuel enrichment and with optimal spark timing, thereby enabling higher engine efficiency and minimizing conditions that might otherwise cause knocking and potential engine damage.

The team plans to explore technical opportunities to adjust ratios of the two fuels on the fly based on the load of the engine. For example, the engine under heavy load could run more efficiently with more natural gas, whereas under lower load, it could use a blend heavier in gasoline. Additional factors that might influence the mixing ratio include the amount of each fuel available on-board, as well as the engine's thermal state.

FCA US' Chris Cowland adds, “FCA is committed to the exploration and development of promising engine technologies that will help improve efficiency, reduce emissions and benefit society.”

The project is funded by DOE's Office of Vehicle Technologies within the Office of Energy Efficiency & Renewable Energy.

Photo courtesy of Wes Agresta/Argonne National Laboratory: An Argonne researcher tightens the fuel rail on a natural gas direct-injection system at the lab.