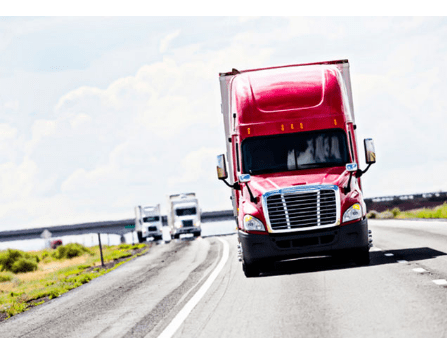 More than 40% of all medium- and heavy-duty diesel commercial trucks in operation in the U.S. – 4 million of 9.5 million diesel trucks – are now equipped with newer technology clean diesel engines, according to new Diesel Technology Forum (DTF) analysis of IHS Automotive vehicles in operation statistics.

The new analysis includes IHS Automotive vehicles in operation representing Class 3-8 diesel trucks from model-year 2007 through 2015 in all 50 states and the District of Columbia.

Beginning in 2007, all heavy-duty diesel trucks that were sold had to meet particulate emissions levels near zero – specifically, levels of no more than 0.01 grams per brake horsepower hour.

“Because diesel overwhelmingly dominates the heavy-duty truck sector and is also the number one power source for medium-duty vehicles, the transition to newer generations of clean diesel technology is significant. Beyond the clean air benefits, model-year 2010 and newer trucks also achieve three to five percent improvements in fuel economy and lower emissions of greenhouse gases.

“There are now four states – Indiana, Utah, Oklahoma and Texas – where more than 50 percent of the registered diesel trucks are the newer cleaner trucks. And in 2015, Oregon had the largest increase in the nation of newer diesel truck registrations, with a 35 percent increase over 2014. California has the largest fleet of commercial truck registrations on an absolute number basis; however, it ranks near the bottom for adoption of newer trucks on a percentage basis, based on our analysis.”

In December 2000, the U.S. Environmental Protection Agency promulgated a rule that established stringent standards designed to reduce emissions from on-road heavy-duty trucks and buses by up to 95% and to cut the allowable levels of sulfur in diesel fuel by 97% by 2010. 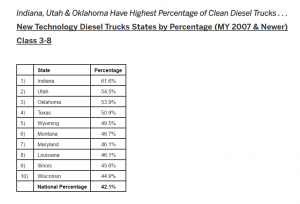