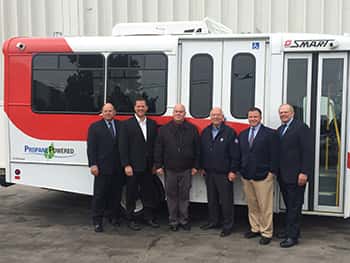 Under SMART's Connector curb-to-curb service, the paratransit buses will transport seniors and people with disabilities, helping them get to work, school and medical appointments throughout the region.

‘SMART is committed to responsibly and eco-consciously serving the communities in southeast Michigan. By using domestically produced propane, we help support local jobs and our economy,” said John C. Hertel, general manager of SMART. “In addition, using the autogas technology will improve our operations, lower costs and preserve the environment in which we work, live and play.’

According to SMART, the total fuel and maintenance savings is projected to be between $1.1 million andÂ $1.7 million over the lifetime of the autogas fleet, with a return on investment of less than four months.

In addition, SMART says the cost of building on-site autogas refueling stations at each of its three terminals was determined to be less expensive than other refueling station options. The vehicles and propane stations are grant funded.

Several local businesses participated in the effort to bring the new autogas buses to SMART, including Mobility Transportation Services, the commercial dealer for Champion Bus Inc., the bus manufacturer. Meanwhile, ROUSH CleanTech equipped the vehicles with its autogas fuel system.

“Residents in southeast Michigan are breathing easier due to SMART's decision to fuel paratransit buses with propane autogas,” says Todd Mouw, vice president of sales and marketing for ROUSH CleanTech. “Plus, this abundant alternative transportation fuel means reduced operating and ownership costs for the transit agency.”

Delivery of all 61 SMART Connector autogas vehicles has been ongoing since February, and to date, 14 vehicles have been placed into service. The full fleet is expected to be on the road by the end of July.