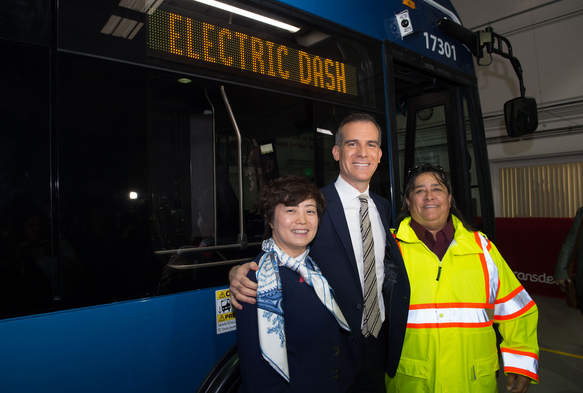 At a recent ceremony, Los Angeles Mayor Eric Garcetti unveiled a new 35-foot, zero-emission, pure electric bus that will be the first of four to be added to the City of Los Angeles Department of Transportation’s (LADOT) Transit DASH fleet.

According to LADOT Transit, the largest operator of municipal transit services in Los Angeles County, the addition of this electric bus is an example of the company’s long-standing commitment to environmental sustainability and moves the city closer to achieving Garcetti’s Sustainable City pLAn goals.

“Reducing carbon emissions is an important part of modernizing L.A.’s transportation system, and adding this electric bus to LADOT’s fleet shows that we can improve service and stay true to the goals in my Sustainable City pLAn,” says Garcetti. “When Angelenos board this bus, they can breathe easier knowing that they can get where they’re going, while doing their part for the environment and helping to keep our air clean.”

LADOT says the heavy-duty bus was manufactured in Lancaster, Calif., by BYD North America, a battery technology and vehicle manufacturer. The buses are powered by a BYD proprietary iron-phosphate battery that allows for a range of up to 145 miles on a single charge.

At the ceremony, which took place at LADOT’s contracted bus maintenance facility, Stella Li, president of BYD America, stated, “Electric transit is not a far-off technology – it is here today, and Los Angeles deserves credit for recognizing that and demonstrating leadership in making zero-emission transit a reality for Angelenos. This American-made bus and its 150 mile-per-charge battery will make our air cleaner and our commutes better.”

Councilmember Mike Bonin, who chairs the council’s Transportation Committee, says, “The addition of this new zero-emission electric bus to the LADOT fleet is the next step toward a cleaner and more sustainable future for Los Angeles. I am thrilled that LADOT continues to lead the transit industry in championing new technologies, and I am proud that we will be able to provide DASH riders exceptional services without adding harmful pollution to our air.”

“The entire LADOT Transit fleet already utilizes clean air fuels, and now, it becomes one of just a handful of transit agencies in the U.S. committing itself to pure electric technology,” adds Councilmember José Huizar. “As the second-largest city in the nation, the City of Los Angeles is absolutely dedicated to sustainability and reducing our carbon footprint at every level possible. These new electric buses are a reflection of our commitment and a welcomed addition to our downtown Los Angeles fleet.”

“The California Energy Commission is pleased to see the long-term commitment of LADOT Transit to clean air, low emissions technologies. LADOT is showing itself to be a leader in the transition to zero-emission vehicles that we encourage other transit agencies to learn from and follow,” says John Kato, deputy director of the fuels and transportation division at the California Energy Commission.