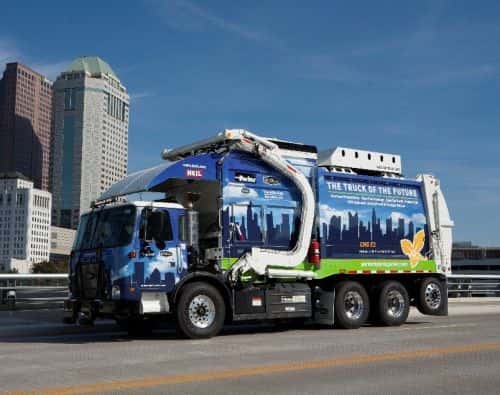 In the effort to reduce the amount of fuel consumed and emissions generated by the fleet of heavy-duty trucks in the U.S., targeting refuse collection vehicles for efficiency improvements presents an opportunity to make a significant impact.

A typical refuse truck travels 25,000 miles each year, and because a conventional truck achieves 2-4 mpg, each consumes roughly 8,600 gallons of fuel annually. At this rate, our nation's fleet of 120,000 refuse trucks in service collectively burns through more than 1 billion gallons of fuel each year.

Reducing the fuel consumption of heavy-duty vehicles presents a significant challenge for manufacturers, particularly considering the already efficient and reliable engines they utilize. In recent years, manufacturers have invested significantly in optimizing the performance of their engines, and the high costs of additional refinements would not be justified by the marginal reduction in fuel consumption they would yield.

Many established and emerging technologies are available to help modernize existing fleets to reduce fuel consumption and emissions. The installation of exhaust after-treatment devices, anti-idling upgrades and changes in operating strategies enable fleet managers to minimize the environmental impact of their operations. Transitioning from gasoline or diesel to fuels such as compressed natural gas (CNG) or propane can also help to reduce emissions.

Regardless of the fuel source, every vehicle produces CO2 emissions during the combustion process, so a goal should be to improve vehicle efficiency and reduce overall fuel consumption to minimize environmental impact. To help achieve that goal, trucking fleets can consider the use of alternative drivetrain technologies.

Hydraulic hybrid technology – not to be confused with hybrid-electric technology – helps improve vehicle efficiency primarily by:

By reducing energy demand, hydraulic hybrid systems reduce fuel consumption – regardless of the fuel source, whether diesel, CNG or another fuel – by 35% to 50%, depending on route density and operating conditions. A truck equipped with hydraulic hybrid technology can consume 4,300 gallons less fuel per year than a truck utilizing a standard transmission, equating to an average annual reduction in CO2 emissions of 48 tons per year – the equivalent of removing 10 mid-sized cars from the road or planting 1,500 trees and letting them grow for 10 years.

In addition to reducing fuel consumption and emissions, the brake-energy-recovery technology reduces brake-replacement need to one or two brake jobs throughout the life of the truck (depending on duty cycle), which dramatically reduces maintenance costs, as well as the disbursement of brake dust into the atmosphere.

The evaluations were designed to compare fuel economy and emissions, and were conducted in three separate cycles:

The testing was carried out between December 2012 and September 2013 to determine the fuel economy, CO2 emissions, hydrocarbon emissions, carbon monoxide and oxides of nitrogen emissions.

The low-speed comparison for fuel economy and CO2 emissions clearly demonstrated the benefits of the trucks utilizing a hydraulic hybrid drivetrain. The diesel-hybrid achieved a low-speed fuel economy of 1.31 mpg: more than double that of the CNG truck and 49% higher than the standard diesel. 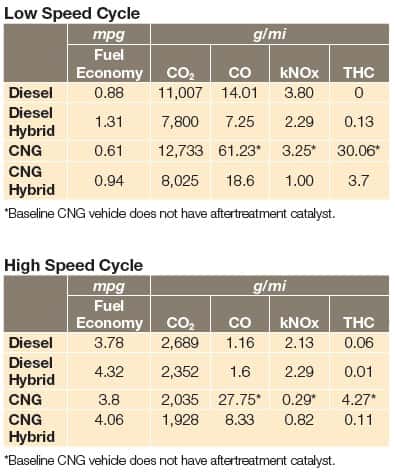 The diesel-hybrid truck also produced just 7,800 g of CO2 per mile – a reduction of over 30% compared to the diesel configuration. Additionally, the CNG-hybrid also demonstrated significant reductions over the CNG baseline: a 37% reduction of CO2 emitted per mile.

The hybrid trucks, while typically regarded for operational benefits at low speeds, also fared well in high-speed tests. The diesel-hybrid truck achieved 4.32 mpg in the high-speed fuel economy test, which was marginally higher than the 3.78 mpg for diesel. High-speed CO2 emissions were lowest with the CNG-hybrid truck, followed closely by the CNG baseline, at 2,035 grams per mile.

Overall, given the inherently low fuel economy of heavy-duty vehicles, an ideal strategy to reduce CO2 emissions is to reduce the fuel consumption of our largest vehicles. Research and real-world fleet operation have proven that hydraulic hybrid technology can reduce fuel consumption and emissions of heavy-duty vehicles, regardless of the fuel type.

Tom DeCoster is the business development manager of Parker's Hybrid Drive Systems Division, which produces the RunWise hydraulic hybrid platform for heavy-duty vehicles. RunWise made its commercial debut in September 2010 with the City of Miami and Miami-Dade County municipal fleets; refuse trucks equipped with RunWise systems have accumulated over 1.3 million miles of operation to date, with fuel savings averaging 43%. DeCoster can be reached at tom.decoster@parker.com.

Photo: Parker Hannifin RunWise is the only hybrid drive technology on the market today with a fully integrated hydraulic-hybrid drive system for commercial trucks.