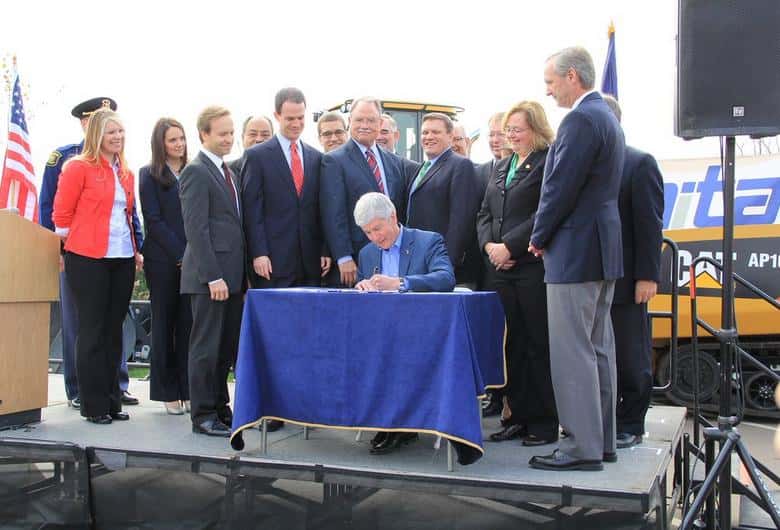 Known nationally and internationally as the birthplace of the automobile industry, Michigan has become equally prominent for its crumbling roads and aging infrastructure. Over the past several years, there have been numerous attempts to solve Michigan’s road funding problem, including a ballot proposal earlier this year. At last, Nov. 10 marked an important day for Michigan, as Gov. Rick Snyder signed a comprehensive road funding package into law, the first of its kind since 1997.

The legislative package sent to Snyder consisted of seven bills and seeks state general fund cuts and savings from the Michigan budget, as well as creates additional revenue by establishing new charges on fuel and increased registration fees in order to put $1.23 billion into Michigan road funding by 2021.

When signing the legislation, Snyder said, “This package provides the single largest investment in transportation funding over the last half century. It will go a long way to improve Michigan’s roads and ensure a safe and efficient system of transportation essential to a stronger future.”

P.A.176: Also sponsored by McCready, this legislation creates a 7.3-cent state tax increase on fuel to 26.3 cents per gallon for all motor fuels, including diesel and natural gas, starting Jan. 1, 2017. Additionally, this tax rate will be indexed to inflation beginning on Jan 1, 2022 (capped at 5% per year).

Opposition to this bill package said it punished average citizens with increased fees on their vehicles. Michigan House Minority Leader Tim Griemel was quoted (in reference to tax-cut provisions within the bill) as saying, “Every year on their birthday, Michigan drivers will be reminded of the increased registration fee, which is the latest in a long line of Republican legislation that has taken money from everyday families and given it to big corporations and the top 1 percent.”

While sensitive to arguments against the new legislative package, nonprofit advocacy group Clean Fuels Michigan (CFM) acknowledged the need to finally see a road funding solution signed into law. Ultimately, CFM is interested in moving forward past this road package to make clean alternative fuels an attractive investment in the state of Michigan.

Eric Clinton, manager of natural gas vehicle business development at DTE Energy and a CFM member, was quoted last month as saying, “Our members collectively believe in economic opportunities that stem from developing this technology and markets in Michigan.”

For this reason, CFM will continue to work with the Michigan Legislature to make sure that it is mindful that alternative fuels provide economic benefits to our communities and environmental improvements essential to the health and well-being of our citizens.

Tony Antonelli is the legislative director at Clean Fuels Michigan, an advocacy group that recently formed to advance the interests of the clean fuels industry and related policies within Michigan. CFM members include major power providers, automotive manufacturers and suppliers, and other companies vested in clean fuel technology. Antonelli can be contacted at tantonelli@acuitasllc.com.