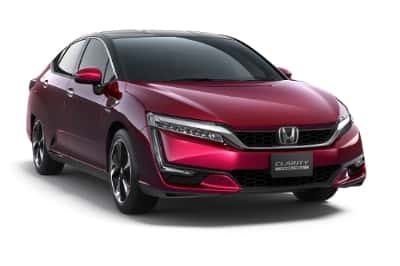 The Honda Clarity Fuel Cell sedan has made its North American debut at the 2015 Los Angeles Auto Show, as Honda announced additional details for what it considers its most advanced zero-emissions vehicle in the U.S. market.

Honda says the new vehicle will feature a driving range estimated to exceed 300 miles and an anticipated refueling time of approximately three minutes at a pressure of 70 MPa.

According to the company, technological innovations to the Clarity Fuel Cell have created a fuel cell stack that is 33% more compact than its predecessor, with a 60% increase in power density compared to the outgoing Honda FCX Clarity. The company adds that the more compact fuel cell powertrain, comparable in size to a V-6 engine, fits entirely under the hood of the car, allowing for a spacious cabin with seating for five passengers.

Honda will begin deliveries of the new vehicles to customers in late 2016 through select fuel cell dealers in California markets, starting in Los Angeles and Orange Counties, the San Francisco Bay Area and Sacramento. Eventually, the company says it will expand the scope of its marketing to additional California markets and other states, including in the Northeast, as hydrogen refueling networks expand.

“Hydrogen fuel cell vehicles are a zero-emissions technology that Honda believes in and has worked to advance for more than 20 years,” says John Mendel, executive vice president of American Honda Motor Co. Inc. “Vehicles like the Clarity Fuel Cell are potential game-changers because they offer an uncompromising, zero-emissions customer experience, with utility, range and refueling times on par with today’s gasoline-powered cars.”

Additionally, Honda has announced that the platform underpinning the Clarity Fuel Cell will also serve as the foundation for a next-generation Honda plug-in hybrid electric vehicle set to launch nationwide by 2018, with more than triple the all-electric range of the Accord plug-in hybrid sedan.