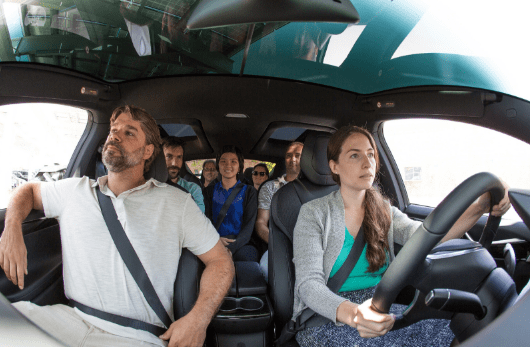 Green Commuter, a Los Angeles-based group working to reduce greenhouse-gas emissions and decrease the cost of commuting, has rolled out a new vanpool and car share service with a fleet of 100% zero-emission Tesla Model X vehicles.

According to Green Commuter, its proprietary software will enable its fleet of all-electric, seven-passenger SUVs to be used by thousands of workers to commute to and from their jobs during rush hour and will be offered as a car share for all Green Commuter members the rest of the time.

“We offer a premium all-electric vanpool option that’s affordable. Gasoline vanpool vehicles are very polluting – usually with ratings from 12 to 18 MPG in real-life driving conditions; we’re the first to use only zero-emissions vehicles instead,” says Green Commuter CEO Gustavo Occhiuzzo.

Green Commuter is based at the Los Angeles Cleantech Incubator, where it was selected to become a portfolio company in 2015. Simultaneous with its Aug. 2 inauguration, Green Commuter will launch an Indiegogo campaign seeking to offer its services at steeply discounted rates so as to jump start the Green Commuter community.

As reported, vanpool users will be able to lease the vehicles on a monthly basis, with total commuting costs comparable to, and, in many cases, cheaper than, current vanpools that use standard vans or SUVs. Currently, there are more than 1,500 vanpools with a destination point in Los Angeles County, and there are approximately 3,000 vanpools across the greater Los Angeles region.

“Current vanpool commuters only use their vans between 10 to 15 hours per week, based on an average one- to one-and-a-half-hour commute each way for five days. That’s only six percent to nine percent of the time during any given week, leaving the van unused for the remaining 91 percent to 94 percent of time,” says Occhiuzzo. “Green Commuter developed an app that enables the synergy between the vanpool and car share systems that will dramatically increase the benefits for all users and maximize the use of the vehicles.”

Occhiuzzo says the company chose the Tesla Model X for the Green Commuter program because it is the only all-electric vehicle currently available that meets vanpool criteria, including seating for seven passengers and a battery capacity sufficient for long-range driving. The CEO says the vehicle was also ideal for car sharing because of its appeal to users who would travel with friends and family around town or to popular nearby weekend destinations, such as Las Vegas, Palm Springs and San Diego.

According to Occhiuzzo, the company will start in Los Angeles – one of the most forward-thinking cities in the country but also one that has great environmental challenges – aiming to reduce members’ carbon footprints and alleviating congestion on the roads.