The Blue Water Area Transit (BWAT) in Michigan says it will increase the price of compressed natural gas (CNG) at its four public fueling stations on Jan. 1, 2017, due to the start of the state’s new CNG fuel tax. The new tax will not affect BWAT bus fares.

“Our price at the pump for CNG customers will increase from $2.30 to $2.57 per gasoline gallon equivalent [GGE],” says Dave McElroy, BWAT’s director of finance. “We also pay a federal CNG excise tax of 18.3 cents, which is not changing at this time.” 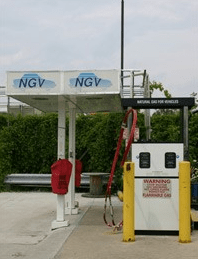 Michigan’s new natural gas tax of 26.3 cents per GGE will be collected on road use of compressed and liquefied natural gas beginning next year on Jan. 1.

According to BWAT, it is Michigan’s largest CNG producer, with the largest fleet of alternative fuel buses in the state. After upgrading its system in 2013, the agency compresses natural gas at the rate of 1,500 cubic feet per minute and produces 40,000 gallons of CNG per month.

“Our commitment to using and producing earth-friendly fuel benefits everyone in our community, even those who never ride the bus. CNG contributes to cleaner air that we all can enjoy,” says Linda Bruckner, Blue Water Area Transportation Commission Board vice chair and Fort Gratiot Township trustee.

The Blue Water Area became one of the nation’s first communities to operate electrified trolleys in the 1880s and then motor coaches in the late 1920s. Since BWAT started publicly funded bus service in September 1976, the transit agency has carried more than 29 million riders.