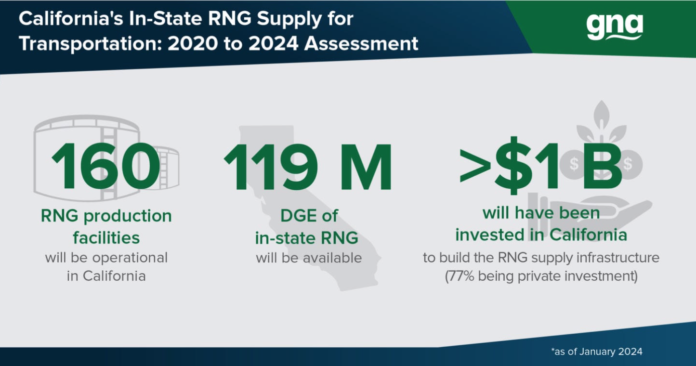 The study, An Assessment: California’s In-State RNG Supply for Transportation: 2020-2024, provides industry stakeholders and policymakers an accurate, data-driven estimate for the total near-term volume of RNG that will be produced in-state and made available for transportation use by California fleet operators.

The report, produced with support from the California Natural Gas Vehicle Partnership, Clean Energy Renewable Fuels, Pacific Gas & Electric, Shell, South Coast Air Quality Management District, Southern California Gas Company, Trillium: A Loves Company and TruStar Energy, was developed to better assess the feasibility of meeting a new requirement for natural gas vehicles to qualify for the Heavy-Duty Vehicle Incentive Program (HVIP), administered by the California Air Resources Board. As of October 2019, natural gas vehicles must be fueled by RNG that is produced in the state to qualify for HVIP funding.

“While newly established HVIP program criteria was intended to encourage the use and production of in-state RNG, there was, until now, no reliable assessment of California’s RNG supply, making it impossible to determine if meeting this new requirement was feasible,” says Cliff Gladstein, founding president of GNA.

“The study determines that not only will there be sufficient supply of in-state RNG to meet this program criteria, but that the cost-effectiveness of the greenhouse gas emission reductions from the use of this in-state resource would be among the best in the state,” he adds.

The study’s key findings include:

Previous attempts to determine California’s potential future RNG supply have primarily focused on hypothetical production volumes. Researchers have mainly considered the availability of organic feedstocks and modeled theoretical future supply based on assumptions about the gross, technically recoverable and economically competitive resource base. By using data provided by state and local agencies, project developers, third party marketers and other reliable sources, this inventory assesses the current and future RNG production of existing and developing production facilities. However, with the accelerating pace of development of new RNG production facilities in California, future funding opportunities, as well as pending regulations, actual in-state RNG production is likely to be even greater than the study conservatively estimates.