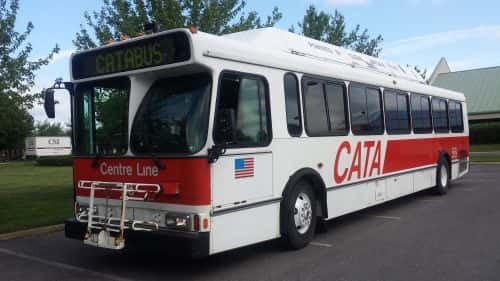 The Centre Area Transportation Authority (CATA), which years ago made a full fleet conversion to compressed natural gas (CNG), will officially retire the last of its first-generation CNG buses this Friday.

The mass transit agency provides bus transportation within State College, Pa., and the surrounding areas, as well as Pennsylvania State University. In 1993, under the direction of then-General Manager Kevin Abbey and the CATA board of directors, the authority started working on how to convert its entire diesel-fueled fleet over to CNG.

As the first steps toward fulfilling this commitment, a cooperative effort was made between the Pennsylvania Department of Environmental Protection and Columbia Gas of Pennsylvania to build a CNG station at CATA's administrative facility, and the authority ordered 16 40-foot Orion CNG buses.

Several more purchases of CNG vehicles over the years enabled CATA to retire the last of its diesel-powered buses in 2010. At that time, CATA says, the authority became the first transit system on the East Coast to have converted its entire fixed-route fleet to CNG.

On Friday, CATA will officially retire the last of its Orion CNG buses. The agency will celebrate the milestone from 1:00 to 3:00 p.m. EDT at its Customer Service Center, located at 108 E. Beaver Ave., State College.

CATA says all are invited to take one last look at CATA's iconic Orion buses on display next to one of its newest New Flyer Xcelsior buses. Plus, there will be a live remote with WOWY 97.1 FM, giveaways, snacks and more.

According to CATA, the authority's all-CNG fleet now consists of 71 buses. That includes four 30-foot ElDorados and five 33-foot Champion cutaways, while the majority are 35-foot and 40-foot buses from New Flyer Industries, 40 of which are the bus maker's 40-foot Xcelsior models.

“The retirement of CATA's first CNG-powered vehicles is significant, as it illustrates CATA's ongoing commitment to the environment and to the community,” says Jacqueline Sheader, CATA's public relations manager.

“The authority's move from diesel to natural gas arose from the acknowledgement of the fact that natural gas is produced locally and nationally, there was a cost savings to be had in times of increased petroleum prices, and being environmentally aware and friendly was simply the right thing to do,” adds Sheader.