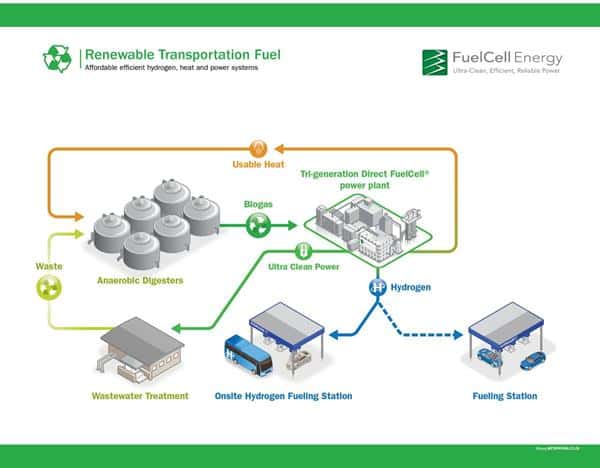 Under the LCFS, certified pathways define the carbon intensity of various types of alternative fuels. FuelCell Energy says production of renewable hydrogen from its megawatt-class power plants provides a transportation fuel for fuel cell electric vehicles (FCEVs). The inclusion of tri-generation FuelCell Energy power plants in the LCFS credit market means that each kilogram of renewable hydrogen supplied for vehicle fueling is eligible for an LCFS credit that can be sold or traded to offset carbon-intensive petroleum fuel usage.

Final certification is expected following a specified period of operation and review of performance data of a megawatt-class tri-generation system utilizing renewable biogas as the fuel source.

Chip Bottone, CEO of FuelCell Energy, says, “The key aspect of supporting the hydrogen infrastructure necessary for widespread fuel cell electric vehicle adoption is a clean and carbon-friendly solution that is priced competitively to the cost of gasoline, which is what we can deliver.”

The recently revamped LCFS requires producers of petroleum-based fuels to reduce the carbon intensity of their products by 10% by 2020. Petroleum importers, refiners and wholesalers can either develop their own low-carbon fuel products or buy LCFS credits from other companies that develop and sell low-carbon alternative fuels, such as renewable hydrogen.

FuelCell Energy says its hydrogen co-production system, utilizing a DFC3000 plant, generates approximately 1,200 kilograms per day of hydrogen, which is adequate to service approximately 300 cars/day or 50 buses/day. Simultaneous with the hydrogen production is the generation of 2 MW of electric power and 2 million Btus of thermal energy.