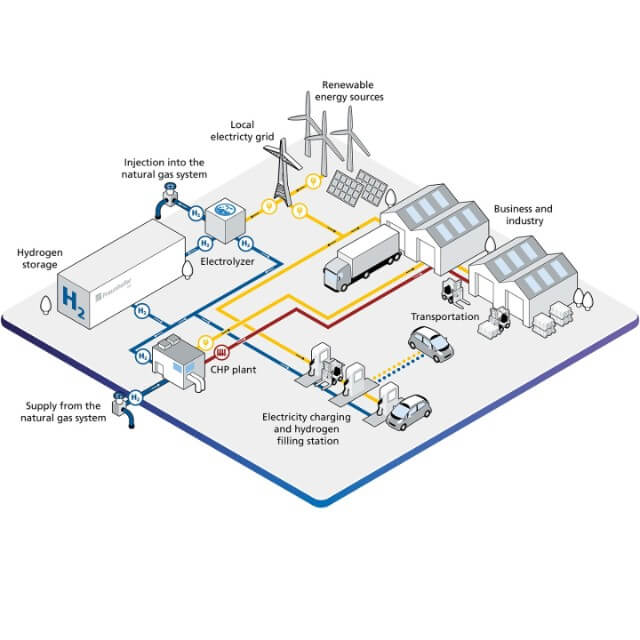 Researchers at the Fraunhofer Institute for Factory Operation and Automation IFF (Fraunhofer IFF) have designed a factory for the distributed and modular production and distribution of green hydrogen.

While hydrogen provides an eco-friendly option to meet industry demand for electricity, heat and transportation, this versatile energy source is only eco-friendly when it is sourced from renewables. The Fraunhofer IFF has a demand-driven, distributed, modular solution that produces and distributes green hydrogen.

“Electricity sourced from sun and wind is used to split water into hydrogen and oxygen in a process called electrolysis. The hydrogen is stored and can be converted by fuel cells in vehicles back into electricity that powers them. We primarily have vehicle fleets with vans and forklifts operating in industrial and business parks in mind,” says Dr. Torsten Birth, a research scientist at Fraunhofer IFF.

The Fraunhofer IFF is working together with MicroPro GmbH and Streicher Anlagenbau GmbH & Co. KG on the HyPerFerMent I project to produce renewable hydrogen from biomass. They are employing a special microbial fermentation process similar to biogas production to produce hydrogen directly from organic waste. The metabolites of certain bacteria produce a gas mixture containing CO2 and 50% H2, which can be easily purified by separating the CO2.

Additionally, Fraunhofer IFF has teamed up with Anleg GmbH to build the Mobile Modular H2 Port (MMH2P), a portable hydrogen filling station for short trips of up to 200 km. Expandable pressure systems with compressors on a trailer can be refilled and can also dispense hydrogen.

The German Federal Ministry of Education and Research (BMBF) is funding the project.