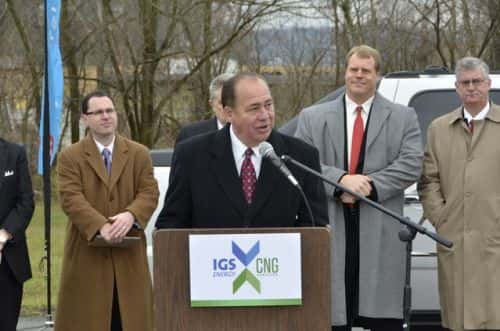 Ohio-based IGS Energy, an energy provider focused on the retail natural gas supply market, has unveiled plans to build compressed natural gas (CNG) refueling stations on the I-79 corridor from Charleston, W.Va., to just over the Pennsylvania border.

IGS Energy CNG Services will begin construction of four stations, representing a $10 million investment, by the end of March. Sites in Charleston, Bridgeport and Jane Lew in West Virginia are being pursued, along with a fourth in Mount Morris, Pa.

‘These soon-to-be new filling stations along I-79 are the beginning of the infrastructure necessary to support our state's conversion to natural-gas-fueled vehicles,’ said West Virginia Gov. Earl Ray Tomblin during a press conference today in Charleston.

IGS Energy says several companies, including natural gas industry players such as Chesapeake Energy Corp., Antero Resources and EQT Corp., have committed to fueling their own natural gas vehicles at stations along the corridor. The West Virginia Department of Highways has also said that its NGVs will get their CNG at these new sites.

‘The addition of these stations extends the availability of CNG along the Route 79 corridor from Pennsylvania into West Virginia, which supports EQT's transition of more than 200 of our Marcellus fleet vehicles to natural gas in 2013 and beyond,’ said EQT's David Ross.

IGS Energy will build, operate and own all four of the new facilities.