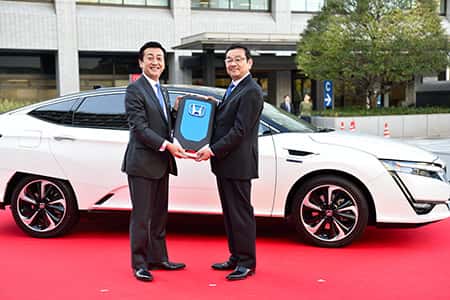 According to Honda, the Clarity Fuel Cell was developed as an FCV featuring both a high level of practicality that represents the “universal value” of an automobile and “cutting-edge appeal” that is suitable for a vehicle that is at the forefront of the times. The Clarity Fuel Cell went on sale earlier this month, with Honda targeting initial sales of 200 units this year.

“When I got behind the wheel of the Clarity Fuel Cell for the first time today, I felt Honda’s strong passion toward the realization of a hydrogen society,” says Hoshino. “For the popularization of FCVs and hydrogen stations, which will be the key to the realization of a hydrogen society, METI will continue to pursue the joint effort of the public-private partnership by facilitating closer collaboration with automakers such as Honda, along with hydrogen station operators and other stakeholders.”

The Japanese government has announced plans that would put 40,000 FCVs on Japanese roads by 2020, as well as 160 hydrogen-fueling stations. Honda, along with competitors Toyota and Nissan, has also expressed support for a nationwide network of hydrogen fuel stations that would help Japan take steps toward becoming the first “hydrogen society” on the planet.