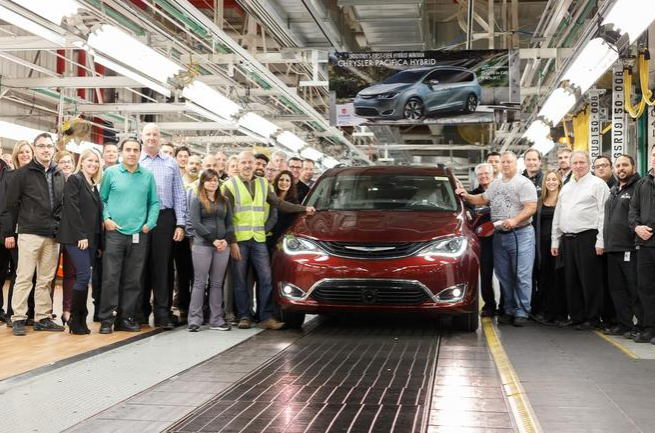 According to the company, the hybrid rolled off the line at the FCA US Windsor Assembly Plant in Ontario on Dec. 1.

As reported, the launch of the Chrysler Pacifica Hybrid represents another milestone, considering it is the first electric vehicle to be built on the Windsor plant’s assembly line.

“The nearly 5,900 employees at Windsor Assembly are bringing more than 33 years of minivan production knowledge and expertise to the launch of the Pacifica Hybrid,” says Brian Harlow, head of manufacturing for FCA – North America.

“Building the Dodge Grand Caravan, the Chrysler Pacifica with the traditional gas powertrain, and now the Chrysler Pacifica Hybrid on the same assembly line requires the expanded application of World Class Manufacturing methods and tools to ensure we deliver world-class quality in every vehicle we make,” he continues. “The Windsor team is proud to build the industry’s first hybrid minivan and is confident that it will provide a positive and delightful experience to our future customers.”

While the 2017 Chrysler Pacifica re-invented the minivan segment, the Pacifica Hybrid builds on its functionality, versatility, technology and bold styling with the addition of electrification technology, making it the most fuel-efficient minivan ever for hauling people and cargo, the company says.

The hybrid version of the sixth-generation family hauler will deliver a U.S. Environmental Protection Agency (EPA)-approved range of 33 miles solely on zero-emissions electric power from a 16 kWh lithium-ion (Li-ion) battery. The Pacifica Hybrid also earned a fuel economy rating of 84 miles-per-gallon-equivalent (MPGe) from the EPA, reflecting the vehicle’s combined city- and highway-cycle performance in electric-mode only, as tested.

“Minivan drivers travel an average of around 30 miles each day, meaning that most Pacifica Hybrid owners will be able to complete their daily activities solely on electric power,” says Tim Kuniskis, head of passenger car brands for Dodge, SRT, Chrysler and Fiat at FCA – North America. “For those longer weekend trips, the 33-mile all-electric range combined with a full tank of fuel will deliver an expected total range of 566 miles, alleviating the potential of any range anxiety.”

According to FCA US, the battery pack may be fully recharged in as little as two hours using a 240-volt plug-in system.

FCA US says it invested $2.6 billion to develop the Pacifica, including its hybrid counterpart, with $744 million allocated to the plant to add floor space, retool and upgrade equipment.

The Chrysler Pacifica Hybrid pricing starts at $34,495 with available U.S. federal tax credit, not including state and local incentives, and will begin arriving in dealerships over the next several months.