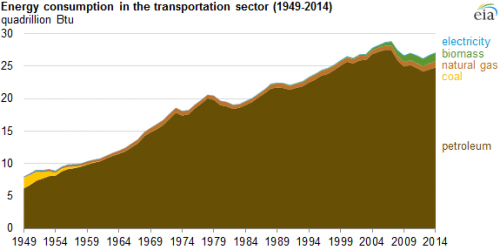 In a new report, the U.S. Energy Information Administration (EIA) acknowledges that petroleum is by far the most-consumed transportation fuel in the country. However, the report says the share of fuels other than petroleum for U.S. transportation has recently increased to its highest level since 1954, a time when the use of coal-fired steam locomotives was declining and automobile use was growing rapidly.

According to the report, the recent increase can be mostly attributed to increased blending of biomass-based fuels with traditional vehicle fuels and growing use of natural gas in the transportation sector.

After nearly 50 years of relative stability at about 4%, the nonpetroleum share started increasing steadily in the mid-2000s, reaching 8.5% in 2014. Of the nonpetroleum fuels used for transportation, fuel ethanol has grown most rapidly in recent years, increasing by nearly one quadrillion British thermal units (Btu) between 2000 and 2014.

The report says nearly all of the ethanol consumed was blended into gasoline in blends of 10% or less, but a small amount was used in vehicles capable of running on higher blends as the availability of those flexible-fuel vehicles grew. Consumption of biodiesel, most of it blended into diesel fuel for use in trucks and buses, grew to more than 180 trillion Btu by 2014.

The report adds electricity retail sales to the transportation sector grew more than 40% from 2000 through 2014, although sales have declined slightly since 2007. Electricity for transportation is mostly sold to railroads and railways. However, the report says this increase does not include the consumption of electricity in electric vehicles that are not used in mass transit, because charging stations for these types of vehicles are likely associated with meters on residential, commercial, or industrial customer sites where this specific use may not be differentiated from other uses.