The U.S. Department of Energy (DOE) has released new data showing that although most electric vehicles (EVs) have shorter ranges than gasoline vehicles, there are EVs with ranges equal to or greater than some gasoline-powered models – and further, that the median range for plug-in hybrid electric vehicles (PHEVs) is 440 miles longer than the 412-mile median range for gasoline models. 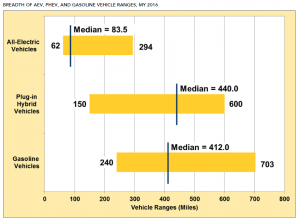 Yes, but I can refuel my gasoline powered vehicle in under 2 minutes. I don’t have to plug it in and let it sit before continuing on my journey. I could never road trip from Denver to Phoenix in a single day (like I did in April) with an electric car.

You could in a Plug-in Hybrid (PHEV) as outlined in the article with a better range than your gasoline only. Then when you are driving in town, you could be driving on all electric while plugging in at night while you sleep. I recommend trying it!