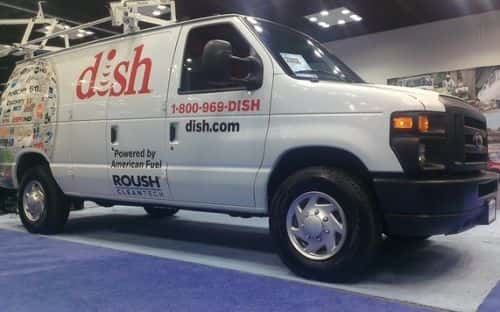 DISH Network Corp. is deploying 200 Ford E-250 propane autogas cargo vans that feature fueling systems from ROUSH CleanTech. The companies were on hand Wednesday during the NTEA’s Work Truck Show in Indianapolis to unveil one of the vehicles and discuss the company’s plans.

DISH says the vehicles will go to work in its customer service fleets operating in Atlanta, Chicago, Detroit, Los Angeles and San Francisco. Each metro will have two locations that accommodate the vehicles, and Abe Stephenson, DISH’s fleet and administration manager, noted during the press conference that drivers will refuel the vans via on-site, company-operated propane refueling infrastructure.

‘Two-hundred vehicles, for us, is a big investment,’ he said, noting that the first propane vans will begin rolling out this summer. More converted E-250s will join the national fleet through the end of the year.

‘It’s going to become a competitive advantage for them,’ added Tucker Perkins, who represented the Propane Education & Research Council (PERC) during the press conference.