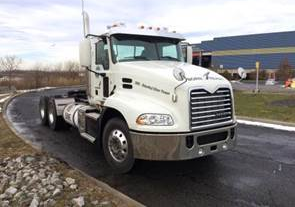 In collaboration with the New York City Department of Sanitation (DSNY) and Oberon Fuels, Mack Trucks says it has begun a demonstration to test the performance of a Dimethyl Ether (DME)-powered Mack Pinnacle model.

According to Mack, DSNY is its first customer to evaluate DME, a non-toxic, clean-burning alternative fuel.

“We look forward to gathering data with DSNY and Oberon to better determine the performance and drivability of the DME-powered Mack Pinnacle model,” says Dennis Slagle, president of Mack Trucks. “We believe DME shows great promise, and we are pleased to be working with our longtime customer DSNY to evaluate the fuel as a viable alternative to diesel.”

As reported, DME delivers the same performance and energy efficiency as diesel fuel; generates no soot; and offers many benefits, including that it can be made from multiple sustainable feedstocks, such as food waste, animal waste, grass clippings and natural gas. DME does not require cryogenic temperatures or high tank pressures.

The Mack Pinnacle Axle Back model is equipped with a Mack MP8 13-liter engine and the Mack mDRIVE automated manual transmission.

The truck company says the evaluation will take place at the Freshkills Landfill, located on Staten Island, N.Y., and will last several weeks. Results are expected to be available mid-2017.

New York City recently announced a vision to reduce greenhouse-gas (GHG) emissions by 80% in 2050 compared with 2005. In order to achieve this goal, the city must reduce 43 million metric tons of GHG emissions. When produced from organic waste, DME can reduce GHG emissions, the company states.

“This first-ever customer demonstration of a DME Mack truck is an excellent opportunity to showcase the potential of DME in real-world use cases,” says Rebecca Boudreaux, president of Oberon Fuels. “We commend the New York City Department of Sanitation and Mack Trucks for their leadership in this program, which we believe will advance the testing and adoption of the zero-soot, low-carbon, emissions-reducing DME fuel to help cities around the world become more sustainable.”

Photo courtesy of Mack Trucks – Mack Trucks began a demonstration to test the performance of a Dimethyl Ether-powered Mack Pinnacle model in collaboration with the New York City Department of Sanitation and Oberon Fuels.

This is a huge win for urban centers, clean water & soil, the environment, energy independence and the future of carbon recycling. DME is the best alternative fuel that readily addresses the many issues associated with the ongoing use of diesel fuel. DME is readily synthesized from abundant natural gas and biomass feedstock using well-established chemical processes. DME is benign, evaporates after a spill, burns smoke free with no sulfur and reduced nitrous oxide and generates 1-2 liters of water for each liter of fuel produced. European and North American governments have made the reduction of CO2 emissions, air pollution… Read more »