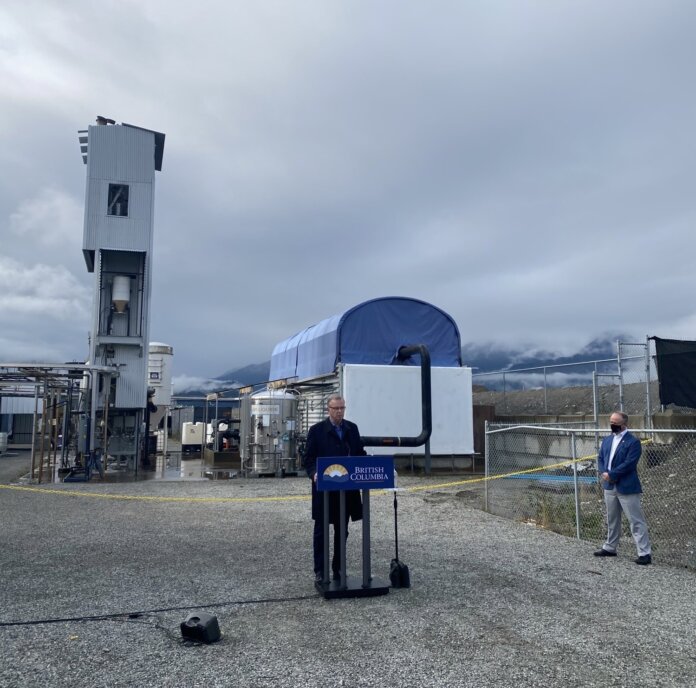 The proposed facility is being designed to utilize CE’s Direct Air Capture and AIR TO FUELS technologies to capture carbon dioxide out of the air and deliver up to 100 million liters of ultra-low carbon fuel each year.

Powered by B.C.’s clean hydroelectricity, the plant will combine atmospheric carbon dioxide with hydrogen to produce renewable fuel, such as gasoline, diesel and jet fuel. These fuels create up to 90% fewer emissions than conventional hydrocarbons and work in existing airplanes, ships, trucks and cars without the need to modify the vehicles.

The AIR TO FUELS solution provides a pathway to significantly reduce transportation emissions. These fuels can be an important complement to electric vehicles by providing a clean liquid fuel for transport sectors that are difficult to electrify and today require the high energy density of liquid fuels, such as aviation and shipping.

The facility is slated to be built 25 kilometers from Merritt, B.C., on one of Upper Nicola Band’s eight reserves. The plant is expected to occupy approximately 100 acres of commercially designated band land, and Huron has partnered with Upper Nicola Holdings Limited Partnership (UNHLP) on a land and business participation agreement. Huron intends to partner with Oxy Low Carbon Ventures, a subsidiary of Occidental, as Huron’s execution and operations partner on the project. Construction is expected to begin in 2023 with operations targeted to commence approximately three years after that.

The partners have commenced a preliminary feasibility engineering and design study on the AIR TO FUELS facility. The B.C. Government’s Innovative Clean Energy Fund is contributing $2 million in funding to the initial design work, demonstrating the province’s continuing support for home-grown cleantech innovations.

CE’s proprietary technology was conceived and designed in Canada. As part of the project evaluation, the federal government, through the Strategic Innovation Fund, is evaluating the project and tracking the engineering work closely. As an initial investor in the demonstration plant in Squamish, the federal government is keen to determine the best path to deploy the technology in Canada. The proposed project is expected to create thousands of local jobs during construction and hundreds of high-quality jobs for the ongoing operation of the facility.

With a target production capability of up to 100 million liters of fuel each year, the project is expected to make a significant contribution to the B.C. Government’s CleanBC target of 650 million liters of renewable and low-carbon fuel production by 2030. The project is also expected to create demand for up to 25,000 tons of green hydrogen annually, representing Canada’s largest green hydrogen project announced to date – a clear demonstration of B.C.’s Hydrogen Strategy in action.