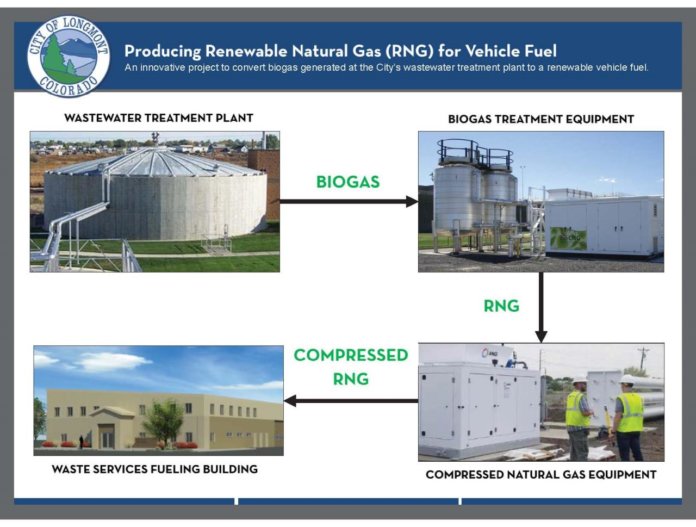 A new renewable natural gas (RNG) project is moving forward in the City of Longmont, Colo.

In late July, contractor CGRS Inc. brought in Maverick Steel Inc. to begin erecting the steel on a site at the northwest corner of the city’s wastewater treatment plant (WWTP). The steel provides the frame for an approximately 23,000-square-foot building for Longmont’s biogas treatment and RNG fueling station project, which will transform byproducts from the WWTP into renewable fuel for the city’s trash trucks.

The front side of the building will house approximately 10,000 square feet of administrative offices on two stories; the remaining 13,000 square feet will serve as the RNG fueling station.

“This project is a culmination of many months of hard work and planning,” says John Gage, civil engineer and RNG project manager for the City of Longmont. “It’s exciting to see this innovative project take shape.”

In recent weeks, CGRS set the compressed natural gas (CNG) equipment into place on-site, built 10 CNG fueling islands, poured concrete for the building’s floor and completed underground plumbing. The CNG equipment will compress the RNG produced at the WWTP up to 4,500 psi; for comparison, the standard dive pressure in a SCUBA tank is 3,000 psi. That compressed RNG will then become fuel for garbage trucks.

Last week, CGRS also began excavating, installing electrical components and pouring concrete slabs that the biogas treatment equipment will sit on at the WWTP. Carollo Engineers designed the RNG equipment, which is anticipated to arrive in November. The RNG pipeline will run from the WWTP to the site with the CNG fueling station.

Once the RNG project is completed, the city will replace 11 of its diesel trash trucks with those that can run on RNG; it will eventually replace its entire fleet of 20 trash trucks. It is estimated that the city will offset over 100,000 gallons of diesel fuel annually, reducing greenhouse-gas emissions by about 1,000 metric tons of carbon dioxide equivalents per year — the equivalent of removing 200 cars from the road.

The total design and construction cost for the equipment to treat, compress and dispense RNG for vehicle fuel is $5.2 million. The total cost for the site work and the new building – including the administrative office area and truck storage/fueling area – is $3.1 million. The State of Colorado’s Department of Local Affairs awarded Longmont a $1 million grant for the RNG equipment, and the Regional Air Quality Council awarded a $385,000 grant toward the purchase of the new trucks.

In addition, the city will be able to take advantage of credits from the U.S. Environmental Protection Agency’s Renewable Fuel Standard program. The annual benefit associated with these credits is an estimated $100,000-$200,000 per year. Savings from no longer using diesel fuel to power the trucks is anticipated at $100,000-$200,000 annually, the city says.