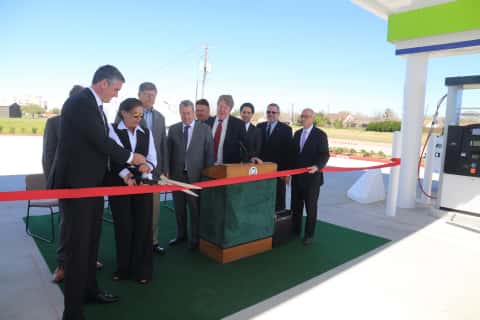 “We are very proud of the Lake Jackson Natural Gas Fueling Station and the collaborative effort that went into its planning and completion,” says Dmitri Tisnoi, president of CNG Energy Partners. “This station is a great example of private companies and government working together to benefit the community and its residents, which is not always the easiest business plan, but we believe it is the right thing to do.”

The station is a public/private partnership between CNG Energy Partners and the City of Lake Jackson and was awarded a grant from the Texas Commission on Environmental Quality. The agreement allowed the expansion of the existing private compressed natural gas (CNG) fueling station to accommodate public access. The public station now includes heavy-duty vehicle CNG fueling capabilities, as well as charging stations for electric vehicles.

The City of Lake Jackson was one of the first municipalities in Texas to embrace alternative fuel for its fleet through the construction of the initial private-access CNG fuel facility and fleet conversion in the early 2000s. Since that time, the city has grown its fleet of dedicated CNG-powered vehicles to more than 40 units. The city will benefit almost immediately from revenue-sharing on sales of natural gas.

Several state and local officials participated in the grand opening at the station and joined the city and CNG Energy Partners in the ribbon-cutting ceremony, which was followed by a community and business luncheon at the Lake Jackson Civic Center.

The Lake Jackson CNG Fueling Station is located at 204 Medical Dr., Lake Jackson, Texas, and is officially open to the public. For the first 30 days, the station is offering CNG at the price of $0.99.

Since 2014, Texas has added 44% more CNG fueling stations and 25% more natural gas vehicles to its roads.