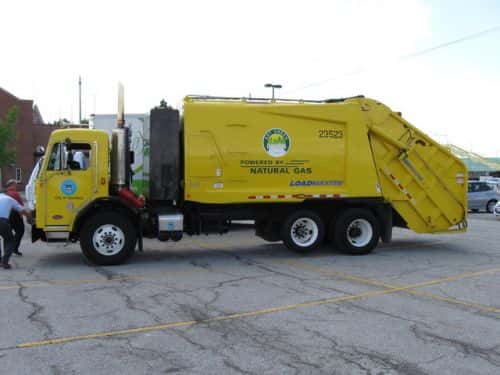 In a remarkably short period of time, the city of Columbus, Ohio, has not only become a national leader in the use of alternative fuels, but has also pioneered a paradigm shift in energy, transportation and environmental efficiency.

‘In 2007, the mayor called upon its fleet division to reduce its fuel consumption,’ explained Kelly Reagan, the city's fleet administrator. ‘This was not an economically-driven mandate. It was driven by the mayor's intention to reduce the city's use of foreign oil, along with reducing emissions.’

Columbus Mayor Michael B. Coleman's position through this mandate was unmistakable: ‘We want to set the standard for energy efficiency and environmental awareness,’ he said. ‘Any city can do this. I decided that Columbus was a good city to make this effort.’

The city faced some serious obstacles to a successful implementation, including convincing their internal departments that alternative fuels offered a positive return on investment and building a complete fueling infrastructure to support the system.

At the mayor's instruction in 2008, the city's fleet division created a Green Fleet Action Plan that called for right-sizing and right-cycling the entire fleet in this city of just under 800,000 people.

‘We wanted to fit the vehicle and fuel with the application, and look for practical ways to reduce our petroleum use overall,’ Reagan said. ‘We considered the vehicles that were highest consumption and highest in emissions, and then looked for a solution that would best match the specific vehicle needs. Our only answer was in alternative fuels.’

Reagan and his staff visited Culver City, Calif., to see how their city fleet operations had converted to alternative fuels. The fleet displaces over 800,000 gallons of fuel and saves more than $1.2 million annually by using compressed natural gas (CNG). 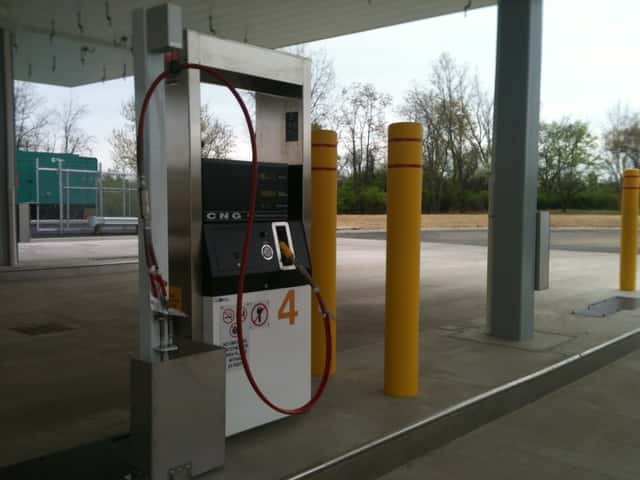 The Columbus fleet department decided that CNG was the best solution for them as well. ‘We went to school on the Culver City program, and it really helped us to make our decision to go with CNG,’ Reagan said. ‘We wanted to migrate into OEM-supported fuel programs. Some cities, such as Dublin, Ohio, had converted their vehicles, but we were interested in using only OEM vehicles.’

Reagan's team was responsible for answering the apprehension of its departments over vehicle performance, maintenance and safety concerns. ‘Everyone wanted a definitive return on investment for this program, but the mayor took the lead – and the responsibility – for assuring that this program would be successful,’ he said.

At the same time, the city was building a reputation for its electric vehicle (EV) readiness planning. Since early 2011, the city has been a member of Project Get Ready, an initiative of the Rocky Mountain Institute that assists with EV planning and resource-sharing with cities across the country.

The city has broken ground on its second CNG station, which is scheduled to open this year, and the third and fourth stations are in the planning stages. Each of the stations was built to handle vehicle sizes ranging from passenger cars to tractor-trailers. All of Columbus' stations are open to the public.

‘We had to make these public access facilities,’ said Reagan. ‘We are not intending these to be profit centers, but we have always wanted to improve the public's access to alternative fuels. If they know the infrastructure is already in place, moving to an alternative fuel vehicle is a much easier decision to make. It has become a part of our overall philosophy – we have become the catalyst for alternative fuels. We will make all our stations open to the public, and will keep the prices very attractive to consumers.’

The city currently has 48 CNG-powered vehicles, used in a variety of heavy-duty operations. In addition, 400 medium- and heavy-duty CNG vehicles will be added to the fleet by 2020.

The city also maintains 2,274 light duty passenger vehicles. Of that number, about 1,000 are used in applications that could be converted to EVs. Currently, the city has two Ford Focus EVs in a pilot program, and two EV charging stations that are open to the public.

‘We were the first to have charging stations in the downtown area, and we're part of a group of more than 40 stations around the city that are open to the public,’ said Erin Miller, environmental steward with the city of Columbus. ‘We like to lead by example. People need to know that the stations are there – in highly visible places – so they are comfortable making the move to alternative fuel vehicles.’

Also, the conversion of the remainder of the diesel-fueled fleet to biodiesel fuel was complete by the end of 2013.

Today, the paradigm has shifted in Columbus. The city continues to add vehicles to its CNG-powered fleet. Its CNG refueling stations have grown from a 55,000 GGE volume in 2012 to an estimated 2013 volume of 300,000 GGE (including 50,000 GGE from private-sector vehicles). The city has planned to have an additional 452 pieces of heavy equipment converted to CNG by 2020, resulting in a further reduction of over 2 million gallons of diesel fuel use each year. 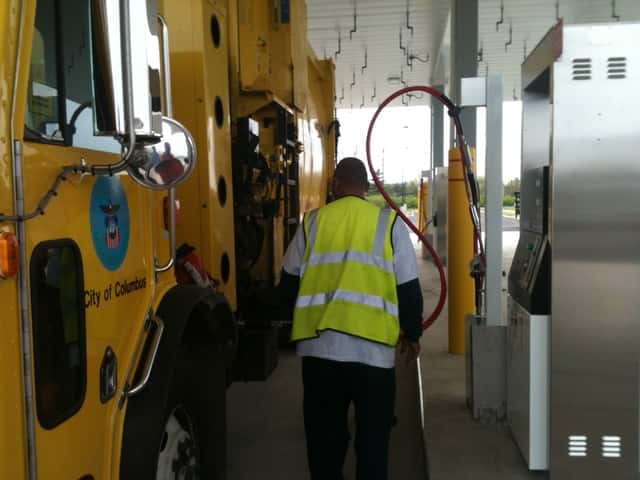 Now there is widespread support for use of these vehicles within the city's departments. ‘We've heard reports that they are safer, have a longer lifecycle and run cleaner than diesel-fueled vehicles,’ Reagan said. ‘We've already extended our preventative maintenance schedule, and because we're using OEM-supplied vehicles, we're not seeing any warranty issues.’

Today, Columbus is the location other cities are visiting to learn about the conversion to alternative fuels. ‘We have served as an example for other Ohio cities in moving towards electric vehicles,’ said Miller. ‘Akron has joined Columbus and is already a Project Get Ready city, and Dayton and Tipp City are among several others moving in that direction. We've been happy to fill them in on our experiences.’

‘We have had representatives from Milwaukee and Denver, as well as other cities in Ohio, want to learn more about our CNG fleet experience,’ said Reagan. ‘In addition, several Fortune 100 companies have asked about our experience. We are also asked to speak at many trade associations about our system, and especially our infrastructure.

‘This program has also been a huge contributor to our ability to attract green economic development opportunities to Columbus and Ohio,’ he said.

Sam Spofforth (sam@cleanfuelsohio.org) is executive director of Clean Fuels Ohio, a member organization of the U.S. DOE's Clean Cities initiative. Clean Fuels Ohio was instrumental in Columbus' alternative fuels deployment, assisting with grant funding and other aspects of the city's project. This article can be found in its original format here. Photos courtesy of Clean Fuels Ohio and the City of Columbus.