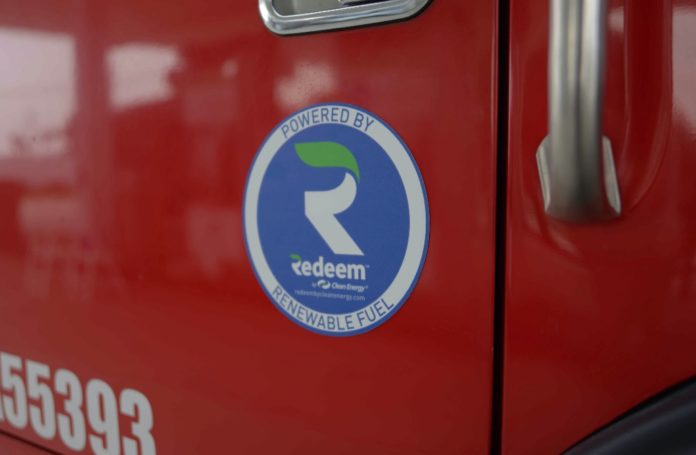 Clean Energy Fuels Corp., a provider of clean fuel to the transportation market, has agreed to new and extended contracts for more than 20 million gallons of Redeem renewable natural gas (RNG) to accommodate the continued demand across key business segments for the ultra-low-carbon fuel produced from organic waste.

Alpha Lion, which carries mail for the U.S. Postal Service between the Northwest U.S. and Southern California, is adding 16 new natural gas trucks to its fleet through Clean Energy’s Zero Now program and is expected to use over 700,000 gallons of Redeem annually.

Zero Now is a program that brings the price of a heavy- or medium-duty natural gas truck at parity with a diesel truck while offering a guaranteed fuel discount for the duration of the agreement. Alpha Lion will also participate in Clean Energy’s Zero Now TouchPoint program, in partnership with the Natural Gas Vehicle Institute (NGVi), to provide Alpha Lion with customer service pertaining to their purchase of new natural gas heavy-duty vehicles.

“From waste to transit to trucking, fleets are discovering that RNG is a proven solution that can significantly decrease the impact of harmful emissions and reduce greenhouse gases,” says Nate Jensen, senior vice president of renewable fuels at Clean Energy. “RNG offers price stability, lowers maintenance costs and can reduce carbon emissions 70% or more, providing a clean and cost-effective alternative to diesel fuel.”

The city of Anaheim, Calif., has signed a five-year service agreement for municipal vehicles that will consume an approximate 500,000 gallons of Redeem RNG.

Clean Energy has been awarded a contract to build a fueling station that will accommodate both fast- and time-filling for Sacramento, along with a long-term operations and maintenance (O&M) agreement, to fuel more than 100 natural gas refuse trucks with an anticipated 8 million gallons of RNG for the next 10 years.

Clean Energy has entered into a network fuel agreement with Athens Services in Los Angeles to support its growing CNG refuse fleet. Athens will utilize the Clean Energy network of public stations throughout Southern California and is expected to consume over 1 million gallons each year.

The city and county of Sacramento have extended their RNG supply agreement with Clean Energy.  Clean Energy provides RNG to three different LNG stations in the region, for a total annual consumption expected to exceed 1.2 million gallons.

Clean Energy is completing the construction of a Republic Services combination time-fill/fast-fill station in Sacramento that will fuel 80 solid waste trucks to support growing operations in the Sacramento region. The station will fuel an expected 1.1 million gallons of Redeem through 2023.

In Las Vegas, Clean Energy is expanding Republic Services’ largest natural gas truck yard in the country, adding 92 time-fill fueling spots. The station will provide approximately 3.2 million gallons of Redeem per year, which will increase by 837,000 gallons when at full capacity.

Clean Energy has increased station capacity at Republic Services stations in San Diego and in Chula Vista, Calif., resulting in additional volume of an estimated 400,000 gallons of Redeem per year.

Clean Energy has signed an agreement to build a station for Republic Services in Freemont, Calif., to accommodate 66 new trucks in the coming years that will result in an approximate increase of 600,000 gallons.

The city of Lodi, Calif., has signed a multi-year contract for an estimated 246,000 gallons of Redeem to power 37 buses and city fleet vehicles.

After obtaining grant funding to migrate its buses to clean RNG, Anaheim Union High School in California has signed a contract with Clean Energy for an estimated 135,000 gallons of Redeem to fuel 15 new school buses.