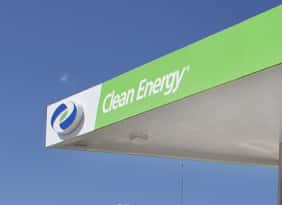 Over the last week, natural gas refueling giant Clean Energy Fuels Corp. has been battered a bit in the financial press and blogosphere, mainly spurred by a couple of articles that appeared on popular investment research and news website Seeking Alpha. And on Monday, Clean Energy president and CEO Andrew J. Littlefair went on the offensive, leading a special investors' conference call to address much of what's been said about the company's massive deployment of liquefied natural gas (LNG) refueling infrastructure in the U.S.

The main premise of the article is that petroleum retailers such as Kwik-Trip and Love's, as well as compressed natural gas (CNG) station builders like Questar Fueling and Trillium CNG, are ‘winning over [Clean Energy's] customers, who overwhelmingly desire CNG, not LNG, for their trucks.’

The piece also claims that, among the ‘flawed assumptions [Clean Energy] embraced in pursuing its headstrong plunge into LNG refueling infrastructure,’ LNG is ‘inherently more expensive than CNG’ and ‘an unstable fuel to deal with.’

Another article, published on the Seeking Alpha site on Feb. 7, is titled ‘Clean Energy Fuels' LNG Strategy Is Crumbling.’ As the unambiguous title suggests, the article voices support for the Feb. 4 installment, saying that there are ‘numerous signs’ that Clean Energy's strategy to roll out dozens of LNG stations for the long-haul trucking industry is coming apart at the seams. (The same author also penned an article titled ‘LNG's Future As The Preferred Fuel For High-Mileage Heavy Duty Trucks Seems Doubtful’ in November 2013.)

At the onset of the conference call, Littlefair noted that Clean Energy wanted to discuss its LNG and CNG refueling strategies ‘in light of some recent reports.’ He didn't mention Seeking Alpha. But having read both articles last week, it didn't surprise me, for one, that the company was taking the time to add its voice to the growing chorus.

Full disclosure: I don't hold a short or long position in Clean Energy stock. But as a B2B media guy neck-deep in clean transportation, one could certainly say that I and NGT News have a pony in this race. So instead of landing on either side of this debate (or doing so inadvertently via the nefarious influence of bias), I'll highlight a few of Littlefair's key points from the conference call.

Clearly, Clean Energy doesn't have all its eggs in the LNG basket.

‘I'm a huge proponent of CNG,’ Littlefair said: a statement that is difficult to refute, even judging solely by the company's book of business. For example, Clean Energy works with more than 200 solid-waste fleets, providing CNG fueling at private stations. The company also supplies CNG fuel to more than 7,000 transit buses.

To be fair, Seeking Alpha's articles were critical of Clean Energy's LNG play as it relates to the long-haul trucking sector. Indeed, America's Natural Gas Highway is all about LNG, all for U.S. truckers. Clean Energy has been transparent about that for quite some time.

Littlefair, in turn, threw out some numbers. Of the roughly 1,400 trucks delivered in 2013 that feature the new Cummins Westport ISX12 G 11.9-liter natural gas engine – which has been a veritable Holy Grail for the trucking industry – 42% of them were specced with LNG fuel systems. Forecasts suggest that in 2014, 57% will feature LNG systems.

I already reached out to Cummins Westport to check on those figures. But without dissecting the 42% and 57% numbers, it's clear that Littlefair has stuck his neck out. If those figures are way off, we're all going to know about it soon.

Perhaps most importantly, he also acknowledged the company's own slowdown in the rate at which it is building LNG stations, as well as that the total number of LNG stations on America's Natural Gas Highway that are in operation is currently low. Of 115 sites, 22 are open for business. The rest are idle, behind chain-link fences and barriers.

Littlefair explained why: Clean Energy's LNG station build-out was – and still is – ahead of LNG truck deployments. The 400 hp version of the Cummins Westport 11.9-liter didn't really start circulating with the earliest adopters until fall 2013.

‘There is no doubt that we're in a test phase,’ he said. ‘These fleets need to gain the experience.’

In that context, Littlefair also acknowledged that deploying CNG in a long-haul application might very well be the easiest deployment, if a fleet is looking to test a few trucks.

But from what he's seen from fleets such as UPS and Raven Transport, when you go big with natural gas, LNG is often the way to go. For instance, based on Clean Energy's own experience, a CNG station that can accommodate 100 or more heavy-duty trucks can cost two to three times as much as a comparable LNG station.

Overall, Clean Energy's contention is that there are a number of factors that fleets consider when looking at natural gas – and some are going to end up opting for CNG. However, the company believes it's much too early to suggest that its stake in LNG is crumbling.