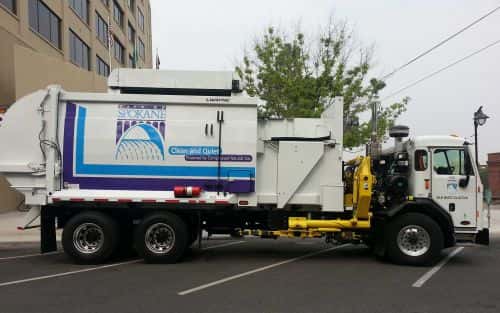 Furthermore, the city says it will help wean itself off of diesel and switch its entire solid waste collection fleet of about 90 trucks to CNG over the next seven years.

According to the city, Spokane's transition to CNG vehicles is both environmentally and financially responsible – a strategy that the mayor and the city's utilities have embraced in the last several years. The move is also part of the city's Sustainability Action Plan, which simultaneously addresses unique opportunities for Spokane related to energy and climate.

“We are continually looking for opportunities to use citizens' dollars more effectively,” said Mayor Condon. “These new trucks provide many advantages – most importantly, the ability to keep utility rates more affordable for everyone.”

The city says it expects to save about $1 million a year in fuel costs once the entire fleet is converted. Additionally, the city says other solid waste operators have reported up to a 70% reduction in maintenance costs for CNG trucks when compared to new diesel-powered trucks. Spokane's vehicle maintenance employees also are going through training to learn how to maintain and repair these vehicles, the city notes.

The city notes the move to CNG coincides with its new Spokane Central Service Center. The center, which is slated to open later this summer, will be a combined solid waste management and fleet maintenance facility, as well as include a CNG fueling station for the trucks.

Photo courtesy of the City of Spokane, Wash.

Any chance of allowing the public to refill at this station?.
Refilling at Spokane will.fill a fuelingvoid along . I-90 corridor in Washington.
Thank you