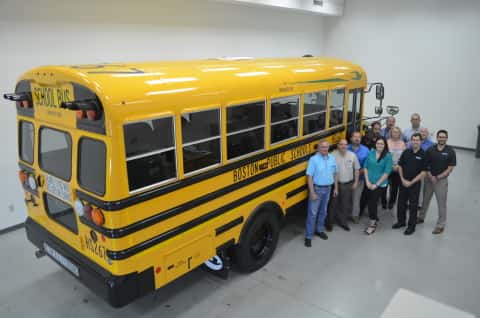 Boston Public Schools will operate 11% of its bus fleet with Blue Bird propane autogas buses, starting with the 2015-2016 school year. The school district is purchasing 86 Blue Bird Propane Vision school buses and hopes to convert more of its diesel fleet to autogas buses in the future.

Like many urban cities, Boston has implemented mandates for reducing tailpipe emissions. The school district, already the city's largest user of diesel fuel, has enacted a number of emissions-reducing initiatives in the past 15 years through its ‘Greening Boston Public Schools’ program.

According to Peter Crossan, fleet and compliance manager of Boston Public Schools, buses fueled by autogas fit with the district's mission to choose vehicles with the highest efficiency and the lowest environmental emissions.

“These new Blue Bird Propane Visions mean many students will no longer be exposed to diesel fumes when boarding or disembarking our buses,” says Crossan.

The new buses, powered by a Ford V10 engine, each come equipped with a ROUSH CleanTech propane autogas fuel system.

About 40% of Boston Public Schools' fleet consists of 169-inch wheelbase buses. According to Crossan, this smaller bus size meets the district's need related to range and hours of service, which averages almost twice the national average on a daily basis.

The school district also expects to save at least $1 per gallon on fuel, as well as lower maintenance costs due to the cleaner burning properties of propane autogas.

To fuel the buses, Boston Public Schools has contracted with a company that performs on-site propane autogas fleet fueling services. “We want other school districts to know that on-site infrastructure isn't the only option when introducing propane autogas into their fleet,” says Crossan.

The school district will take delivery of the buses in June.