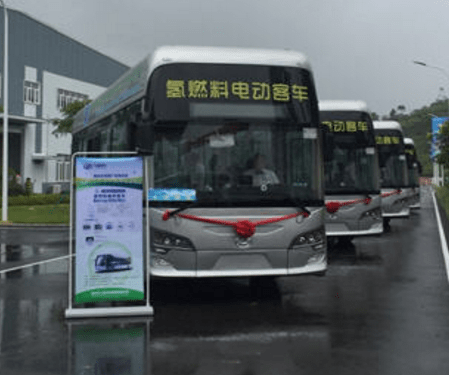 Canada-based fuel cell company Ballard Power Systems says it has commissioned and deployed 10 fuel cell-powered buses in the City of Yunfu, in the Chinese province of Guangdong, as part of the government’s larger plan to address air quality in urban centers through zero-tailpipe-emission mass transit solutions.

According to Ballard, the unveiling took place at a ceremony held at the Foshan (Yunfu) Industrial Transfer Park in Yunfu City and was attended by the Mayor of Yunfu, Wang Sheng, and Vice Mayor of Yunfu, Xu Guo.

This move follows last month’s commissioning and deployment of an initial 12 fuel cell-powered buses in the District of Sanshui, in the City of Foshan, as previously reported. This second roll-out now brings the total number of buses deployed since the initial tranche to 22.

As Ballard announced in a September 2015 release, 300 fuel cell buses are currently planned to be deployed in the cities of Foshan and Yunfu.

Ballard says the new fuel cell buses in the City of Yunfu are 11 meters in length and feature advanced safety systems, 80-person capacity, an anticipated driving range in excess of 300 kilometers, an expected hydrogen gas consumption of less than 6.5 kilograms per 100 kilometers, zero tailpipe emissions and remote monitoring. Unlike many battery-electric bus routes, the transit route in Yunfu will not require any catenary wires or on-route recharging.

Randy MacEwen, Ballard’s president and CEO, comments, “Congratulations to the City of Yunfu and the province of Guangdong on the successful launch of the second tranche of clean energy fuel cell buses. This deployment of 10 buses in Yunfu comes rapidly on the heels of the 12-bus deployment in Foshan last month. Together, these are the largest deployments of zero-emission fuel cell buses in China’s history but represent just the beginning of market adoption.”