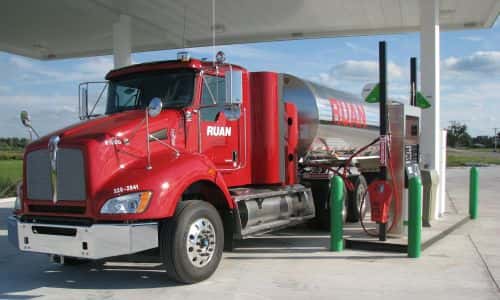 ampCNG has announced that its fleet of Class 8 compressed natural gas (CNG)-powered trucks has surpassed 30 million miles – an accomplishment the company says helps demonstrate the commercial and operational viability of CNG as a fuel for heavy-duty trucks.

Chicago-based ampCNG's primary business is developing, owning and operating public-access CNG fueling stations built for the heavy-duty trucking industry. The company says it currently owns and operates 21 CNG stations nationwide (19 of which are part of amp Trillium, ampCNG's joint venture with Trillium CNG) and has plans to open several more this year.

The 42-truck CNG fleet is leased by Renewable Dairy Fuels, a subsidiary of ampCNG, and operated by Ruan. The fleet carries raw milk from Fair Oaks Farms to processing facilities in Kentucky, Michigan, Tennessee and Indiana.

“We don't want to be in the trucking business, but we felt it was important to put these trucks on the road to prove that CNG works for the Class 8 market,” says Grant Zimmerman, ampCNG's senior vice president of business development. “Along the way, we reduced operating costs for our dairy customers and helped the environment. Furthermore, the drivers report that they actually prefer CNG versus their old diesel units because the CNG trucks are cleaner and quieter.”Â

Since deploying the CNG trucks in 2011, ampCNG says it has displaced approximately 4.6 million gallons of diesel and eliminated approximately 7,100 tons of carbon dioxide.