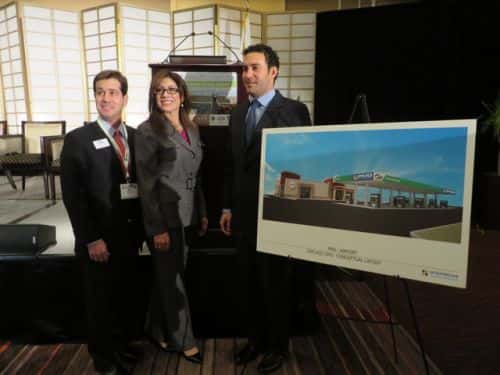 The Chicago Department of Aviation (CDA) has contracted with Clean Energy Fuels to develop a travel center and alternative fuels station near the city's O'Hare International Airport.

The 4,000-square-foot center, which will be open 24/7, will offer compressed natural gas (CNG), biodiesel and conventional gasoline, as well as fast-charge stations for electric vehicles. Located at the southeast corner of Higgins Rd. and Patton Dr. on city-owned vacant land, the center is part of ongoing sustainability efforts at Chicago's airports.

The project, which has a target opening date of early 2016, is expected to create 73 construction jobs and 30 permanent positions. The CDA will receive a base rent of $100,000 for the land and 5% of gross sales. The project will be built and operated by PMG Airport Developers and Clean Energy Fuels.

An increasing number of vehicles using the airport are powered by alternative fuels, including taxis and hotel and rental car shuttles. The public-access travel center near the airport will offer convenient access to alternative fuels for these fleets, as well as the general public. The travel center will also feature other amenities such as a convenience store, restaurant, car wash, flight-information display screens, an ATM and Wi-Fi.

“Providing better access to alternative fuels at O'Hare provides multiple benefits for the city and the public,” says Mayor Rahm Emanuel. “We are able to reduce greenhouse gas emissions and improve air quality, while at the same time, generating revenue.”