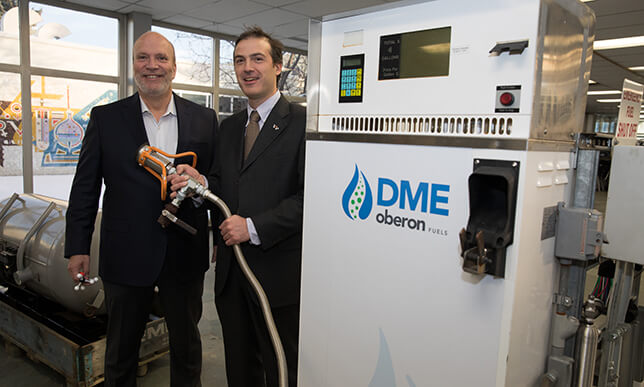 New technology that will allow long-haul trucks to burn low-carbon fuel in all weather is under development at the Northern Alberta Institute of Technology (NAIT). The partnership between the Canadian polytechnic, Mack Trucks, Oberon Fuels and Westcan Bulk Transport is being funded with C$368,000 from the Alberta Ministry of Economic Development and Trade.

Researchers in the School of Applied Sciences and Technology at NAIT will work to develop fuel moisture management technology for dimethyl ether (DME), a cleaner-burning, diesel fuel alternative that can be made from natural gas or methanol produced from biomass feedstock, such as wood chips. NAIT says the technology will remove any residual water from the DME before injection into the engine, eliminating the risks of corrosion and reduced performance.

The researchers hope to test the technology using Mack trucks from Westcan’s fleet, traveling Highway 2 between Edmonton and Calgary.

Dr. Glenn Feltham, NAIT president and CEO, says, “As a leading polytechnic, NAIT supports applied research and technology-based education in areas critical to Alberta – a primary focus being the energy sector. Alberta, and the world, are moving toward a low-carbon future. Support from the government of Alberta allows NAIT to work in partnership with industry to create this future.”

Deron Bilous, Alberta’s minister of economic development and trade, comments, “NAIT’s researchers are making our province proud – attracting international attention and investment. That’s why we’re helping them create new products based on Alberta discoveries that mean a healthier environment for people across the continent – and new jobs and a more diversified economy here at home.”

Dr. Rebecca Boudreaux, president of San Diego-based Oberon Fuels, adds, “Oberon’s efforts to develop a new global transportation fuel have been accelerated by the support and participation of such forward-looking companies who are committed to sustainable transportation. Alberta is leading the way by investing in DME.”

Rob Durling, principal engineer of Mack Trucks, comments, “We are pleased to participate in this project with NAIT and look forward to the insights it will provide.”