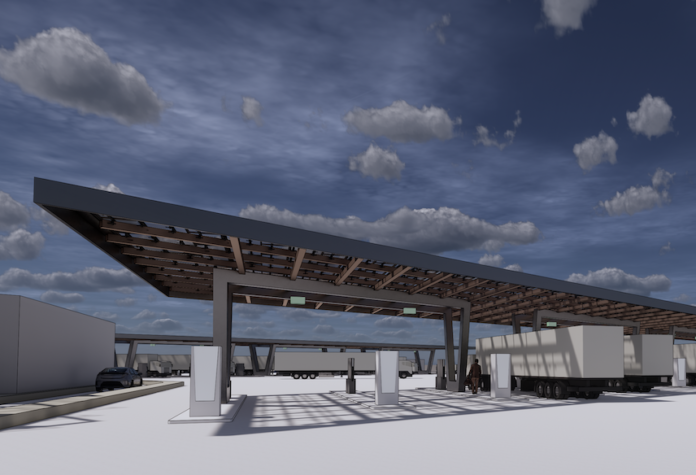 WattEV, a company focused on transitioning the U.S. trucking industry to zero emissions, says it is building a pilot electric truck stop in Bakersfield, Calif.

The 110-acre truck stop, positioned near logistics fulfillment centers run by Amazon and Walmart, will feature a solar micro-grid with battery storage and grid energy from PG&E. WattEV says it will be the nation’s first 25 MW, solar-powered, electric-only public truck stop to serve electric truck transport between the Central Valley and Southern California’s ports and shipping hubs.

“We aim to enable the addition of 12,000 heavy-duty battery-electric trucks to the roads in California by the end of 2030, exceeding existing forecasts,” says Salim Youssefzadeh, CEO of WattEV. “If it works in California, it’ll work just about anywhere in the country.”

Additionally, WattEV says it has developed a novel business model for the truck transport industry, labeled trucks-as-a-service (TaaS), that opens the transition path for transporters to use battery-electric trucks.

“Focusing on the revenue and profit potential of an electric truck, rather than the fixed and variable cost of owning a new or used diesel truck, is how we can get more drivers into more electric trucks more quickly,” adds Youssefzadeh. “Waiting for the market to mature organically – at the rate it’s currently going – could take more than a decade. Our aim is to fast-track the transition to electric truck transport by doing things a little differently.”

WattEV says its TaaS business model generates initial demand for charging by offering a solution to transporters that is financially viable while enabling shippers to meet their sustainability goals.