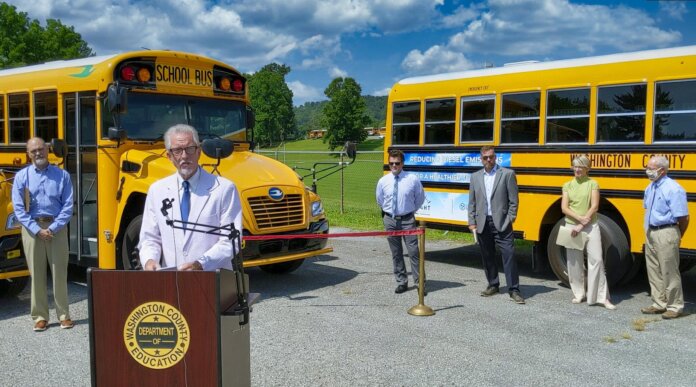 Washington County Schools (WCS) has celebrated the addition of five new propane-powered school buses to its fleet through a ribbon-cutting and “big check” presentation event.

In late 2019, WCS applied for and won a $102,500 grant to help replace older diesel buses through Tennessee’s Reducing Diesel Emissions for a Healthier Tennessee (RDE4HT) Rebate Program. The five new propane buses were received in June and July, checked and tested by WCS transportation staff and began operations in recent weeks.

“This is part of our overall plan to both reduce operating costs here in WCS and to reduce our carbon footprint. This project is good for students, good for our community and good for the bottom line,” says Dr. William Flanary, director of WCS.

“I learned that the diesel school buses that you see around our lot here have over $20,000 worth of parts per bus that a propane bus does not. Those are parts that we will not have to repair or replace over the 16-year life of these propane buses, so the math adds up quickly – we will start saving money almost immediately,” he adds.

On behalf of the EPA and the state of Tennessee, Jonathan Overly of the East Tennessee Clean Fuels Coalition presented WCS a check for $102,500 to help WCS pay for additional costs in implementing the new school buses.

In addition to the five propane school buses, WCS has won funding to replace another older diesel bus with a new all-electric one that should be received in September. WCS is interested in trying several new bus technologies to assess their operability, potential cost savings and emissions reductions.

The RDE4HT Rebate Program releases a request for proposals in October each year prioritizing school districts for bus replacements, with an emphasis on alternative fuel buses over new diesel buses.

As Flanary noted during the event, there are roughly 120 propane school buses in operation in Tennessee. Out of the 95 counties in Tennessee and roughly 150 school districts, there are now almost 15 districts that have built or are building alternative fuels programs utilizing propane autogas and other alternative fuels. Many districts are recognizing the cost savings and other advantages that come with switching to propane-powered school buses.

Photo: WCS’ ribbon-cutting event celebrating the addition of propane buses to its fleet