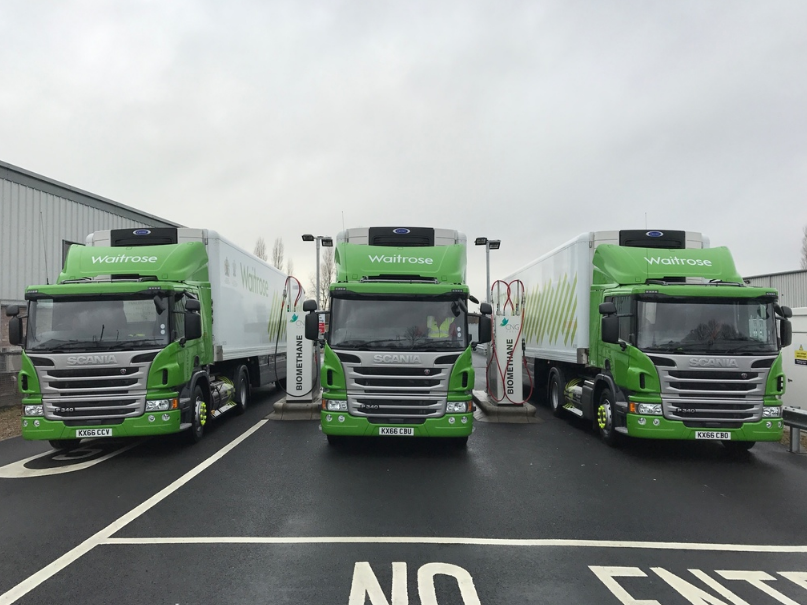 Supermarket group Waitrose has introduced a fleet of compressed natural gas (CNG) trucks with a range of up to 500 miles. The trucks, which use advanced technology developed jointly with Scania and Agility Fuel Solutions, will be fueled with biomethane from CNG Fuels.

According to CNG Fuels, 10 new Scania-manufactured CNG trucks entered operation for Waitrose in January and will be used to make deliveries to the company’s stores in the Midlands and the North. These vehicles are the first in Europe to use twin 26-inch-diameter carbon fiber fuel tanks that store gas at 250 bar of pressure to increase range from around 300 miles to as much as 500. This will allow them to always run entirely on biomethane, which is 35% to 40% cheaper than diesel and emits 70% less CO2.

The carbon fiber tanks, which are already in use in the U.S., were adapted and certified for the European market by Agility Fuel Solutions, offering significant advantages over the standard European setup of eight steel gas tanks. As reported, the vehicles are half a ton lighter; hold more gas; can cover a greater distance, depending on the load being carried; are quicker to refuel; and are easier to maintain.

“With Europe’s most advanced CNG trucks, we will be able to make deliveries to our stores without having to refuel away from base,” says Justin Laney, general manager for central transport at the John Lewis Partnership, which owns the Waitrose business. “Using biomethane will deliver significant environmental and operational benefits to our business. It’s much cleaner and quieter than diesel, and we can run five gas trucks for the same emissions as one diesel lorry.”

Philip Fjeld, CEO of CNG Fuels, adds, “High-pressure, carbon fiber fuel tanks demolish the ‘range anxiety’ concerns that have made many hauliers reluctant to move away from diesel to CNG. Renewable biomethane is far cheaper and cleaner than diesel, and, with a range of up to 500 miles, it is a game-changer for road transport operators.”

Todd Sloan, vice president in research and new product development for Agility Fuel Solutions, says, “We are seeing a shift to natural gas because it allows companies to control fuel costs, meet sustainability goals and take care of drivers. CNG costs less than diesel and has lower tailpipe emissions. In addition, our high-capacity fuel tanks increase route efficiency and driver confidence. It’s a win-win for everyone.”