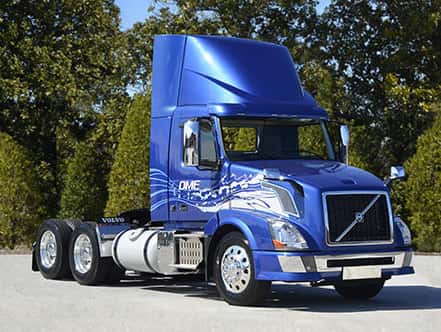 In early 2012, Volvo Trucks created buzz upon the announcement that it would be developing its own natural gas engine for the North American heavy-duty trucking sector. The 13-liter power plant, paired with liquefied natural gas (LNG) technology, would be a market complement to engines such as Cummins Westport’s new 11.9-liter ISX12 G.

Those plans are now on hold, with the company stating this week that it is ‘adapting to the pace of the North American alternative fuel market.’

Volvo’s new product was intended to be a compression-ignition engine that used HPDI technology from Westport. The company reported more than two years ago that the engine would be commercialized in 2014.

However, Volvo cited the ‘modest’ pace of natural gas fueling infrastructure development for long-haul trucking in the past year as one factor in its decision to wait on the release of the 13-liter engine.

Volvo is also scaling back its market plans for trucks that run on dimethyl ether (DME) – an alternative fuel that can be produced from natural gas and biogases and used in diesel engines, such as Volvo’s D13.

Last year, the company began working with Oberon Fuels as a DME supplier and with fleet customer Safeway Inc. to test DME in over-the-road trucking applications. According to Volvo, this kind of pilot testing will continue, but the original commercialization target for DME-powered trucks – 2015 – has been set aside.

‘We now believe it will take more time for the market and other stakeholders to embrace the approach,’ Volvo Trucks’ John Mies tells NGT News.