Home Up Front Virginia’s Getting It Done: One Part Propane, One Part Natural Gas 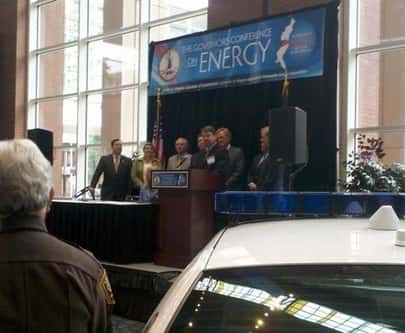 On Tuesday, Virginia Gov. Bob McDonnell announced that his administration had formed agreements with two private companies that will develop alternative fueling infrastructure and, in turn, spur a quicker adoption of propane autogas and compressed natural gas (CNG) among the state's fleet vehicles.

The governor also put his ink on a recent memorandum of understanding that is pooling states' purchasing power for natural gas vehicles (NGVs). Spearheaded by Gov. Mary Fallin of Oklahoma, the collaborative and resulting request for proposals – the initial results of which are expected to be announced later this week – are designed to create steady demand for NGVs and, therefore, foster a market for new OEM NGV offerings.

On the CNG side, Clean Energy Fuels Corp. will develop six or more new natural gas refueling stations in the state. For propane, Alliance AutoGas has been contracted to build at least seven refueling facilities. Additional CNG and autogas refueling infrastructure will be developed based on demand.

The first and most significant customer for these stations is intended to be Virginia itself – via its own fleet conversions to CNG and autogas – but municipalities, businesses and consumers will all be able to access the facilities.

‘The infrastructure created through this effort will be available to fuel passenger vehicles and other commercial fleets,’ McDonnell said during the announcement, which coincided with the third-annual Governor's Conference on Energy in Richmond. ‘Through this innovative public-private partnership we enter into today, the commonwealth, industry leaders and innovators can work collaboratively to move state government and private industry away from vehicles fueled by gasoline and diesel fuel.’

Clean Energy has a public-access CNG station in Richmond – its first in Virginia – and another is scheduled to open soon near Dulles International Airport. Both of these facilities are co-located with Quarles Fuel Network fleet sites.

Mark Riley, eastern region vice president for Clean Energy, called the governor's plans a ‘ground-breaking program that will give the commonwealth, local governments and consumers easier and greater access to natural gas.’

Alliance AutoGas partners Blossman Gas and Phillips Energy will build the fueling stations, and the organization is also working with ROUSH CleanTech and CleanFuel USA to coordinate autogas vehicle conversions and provide OEM autogas vehicles for the commonwealth.