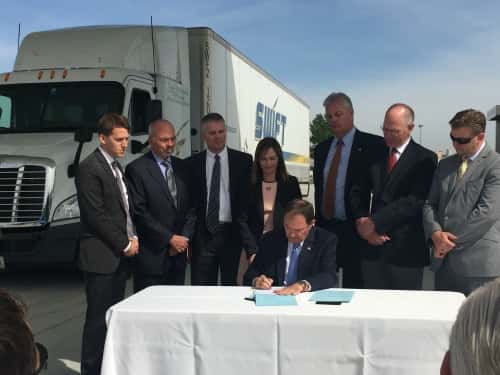 Technically, the governor approved both pieces of legislation earlier this year, but Herbert, Handy and other officials used the event last week to help highlight the state's efforts to support cleaner fuel and, thus, cleaner air. The ceremony took place at a Questar Fueling compressed natural gas (CNG) station in West Valley City.

NGT News spoke with Handy about his ambitions back in January, and now that the 2015 general session is over in Utah, the representative explains his two passed bills and discusses the road ahead.

In January, Handy emphasized that his ongoing push for more alternative fuel vehicles is a clean air initiative.

As he pointed out, ‘We have serious air-quality problems along our populous Wasatch Front, where more than 1 million individuals reside. If we can get more traditional-gas vehicles to convert, perhaps our air can be cleaner.”

According to Handy, H.B.15 extends Utah's current AFV tax credit program. The state offers a tax credit of up to $1,500 per vehicle for the purchase of, or conversion to, AFVs. Applicable alternative fuels include CNG, liquefied natural gas (LNG), propane autogas and electricity.

However, Handy says his main goal of the legislation was the establishment of the Conversion to Alternative Fuel Grant Program. Rather than offering a tax credit, the program will provide a grant of up to $2,500 for each alternative fuel conversion. He says the company that installs the conversion equipment will apply for the state grant as a form of rebate, with the savings being passed on to consumers.
“My thinking is that the tax credit process is cumbersome and not that much of an incentive because of the time lag from the time of the conversion until the time of the next year's tax filing,” he states. “What I wanted was to accelerate the incentive by having it take place at the point of sale.”

Handy hopes the grant program will stimulate more conversions and make the process easier for consumers.

“Say I want to convert my gasoline vehicle to CNG,” explains Handy. “I find my qualified provider and make a deal for $5,000. I would pay $2,500, but the provider shop would then apply to Utah's Division of Air Quality for the additional $2,500.

“This way, a person's out-of-pocket expense will be less,” he continues. “The provider shop has to do a little more work to ensure that the rebate or grant is approved before proceeding, but once it submits the paperwork online, it should just take 30 days or less to receive the check from the state.”

Although H.B.15 has been signed into law, Handy's new rebate program isn't quite a reality yet.

“One challenge has been the funding of the endowment, which we're still working on,” notes Handy. “The policy framework is in place, and Utah's Division of Air Quality is figuring out the details. In the next legislative session, I will need to secure the funding to be placed in and drawn from our Clean Fuels and Vehicle Technology Fund. That said, I don't anticipate a problem.”

Handy's other successful bill, H.B.406, will provide an income tax credit for the purchase of new Class 7 and 8 heavy-duty vehicles that run on either CNG or LNG. The representative calls the legislation “unique” for the state.

“In Utah, we have dealt with passenger vehicles but never with large trucks, which contribute the most to our air pollution because they are primarily diesel,” he says.

Despite his belief that tax credits can be “cumbersome” for consumers, Handy says businesses operating large trucks are likely better suited to handle the ins and outs of such incentives.

The law expires on July 1, 2020, at which point he says legislators will reevaluate and determine whether the legislation is achieving its goals.

“Our state gasoline tax is 24.5 cents per gallon currently, and it has long been felt that CNG drivers weren't paying their fair share of road upkeep and construction,” explains Handy, adding that the legislation's gradual tax increase was negotiated with the CNG industry. “We didn't want to impact or dis-incentivize CNG drivers too much at this point.”

This general session, Handy also reintroduced H.B.49, a bill to encourage the use of clean fuels in school buses across Utah. Although the legislation passed in the state House of Representatives and Senate committee, he says it “died due to lack of funding.”

“I became educated on alternative fuels in 2013 in preparation for the 2014 general legislative session in Utah,” he explains. “That's when I sponsored the Clean Fuel School Buses and Infrastructure legislation. I have tried for two years to get this through but haven't been successful yet. The bill calls for a $20 million appropriation, and it's just too steep. I've developed new objectives for 2016 and will try again!,”

Overall, though, Handy says he is very excited about his AFV policy achievements since January, and he plans to keep fighting for cleaner fuel in Utah.