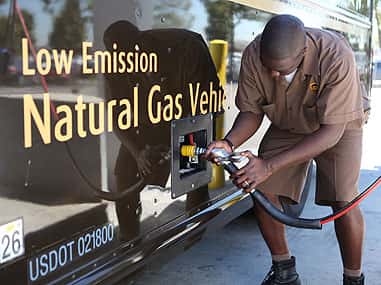 UPS says it has achieved its goal of driving 1 billion miles in its alternative fuel and advanced technology fleet one year earlier than initially planned. This “Rolling Laboratory” of more than 7,200 alt-fuel vehicles was dispatched to transform commercial transportation and spur growth in the clean fuels market, according to the delivery company.

“We had a big sustainability goal as we set out to make the most of our rolling laboratory by driving 1 billion clean miles in alternative fuel vehicles – that’s the equivalent of well over 4,000 trips to the moon,” says David Abney, chairman and CEO of UPS.

“While attaining this goal is new, our commitment to seeking out alternative fuels actually dates back to the 1930s, when UPS tested electric vehicles. With more than 100,000 drivers logging more than 3 billion miles per year, our future depends on our ability to meet the growing demand for global trade while reducing our impact on the environment,” he adds.

Shattering that goal one year early, about 12% of the conventional diesel and gasoline fuel previously used by UPS’ ground fleet is now being replaced by alternative fuels, including renewable natural gas and renewable diesel.

Recognizing that alternative fuels each have unique advantages depending on the routes and geographies in which they are used, UPS deploys the thousands of vehicles in its Rolling Lab to determine what works best in each situation. The company mentions that its sustainability initiatives have encouraged electric and hybrid electric vehicles in the U.S. and natural gas, renewable natural gas and propane across the globe. 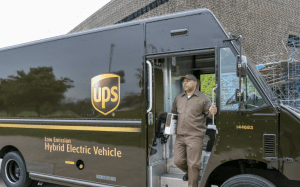 “Many congested cities around the world are implementing zero-tailpipe-emissions zones, and UPS is keeping ahead of the curve by investing in advanced technologies and creating the commercial delivery fleet of the future,” comments Abney.

By the end of 2016, UPS will have invested more than $750 million in alternative fuel and advanced technology vehicles and fueling stations worldwide since 2009.

That continued investment, combined with supportive government policies and a collaborative set of partners, is expected to expand the development and utilization of alternative fuels, vehicles and infrastructure throughout the world.

As previously reported, UPS announced plans back in March to build 12 new CNG fueling stations and add 380 new CNG tractors to its growing alternative fuel fleet, totaling $100 million in alt-fuel investment. Before that, the company also announced that through a partnership with Clean Energy Fuels Corp., UPS stations in Houston and Mesquite, Texas, will dispense renewable liquefied natural gas to a fleet of about 140 UPS tractors.

UPS reports its progress annually in its Sustainability Report and includes key metrics, such as CO2 emissions, energy consumption, and alternative fuel and advanced technology miles driven, among others.