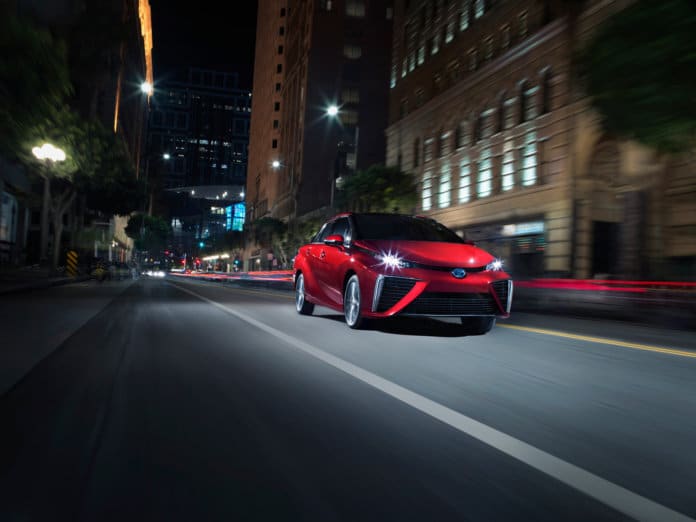 The Toyota Mirai, one of the world’s first mass-produced hydrogen fuel cell electric vehicles (FCEVs), has surpassed a sales milestone of 3,000 vehicles in California. Toyota, which recently announced the Marai’s Canadian debut, claims the vehicle now accounts for more than 80% of all hydrogen FCEVs in the U.S.

“Toyota remains at the forefront of developing and deploying hydrogen fuel cell technology, and we believe strongly in its potential to help realize a more sustainable and zero-emissions society,” says Bob Carter, executive vice president of Toyota Motor North America. “From our success in launching the Mirai to our work in building the world’s first megawatt-scale carbonate fuel cell power generation plant, Toyota is proud to bring to market new uses for this versatile technology.”

The Toyota Mirai, a four-door, midsize sedan, is a zero-emission hydrogen vehicle with an EPA estimated driving range rating of 312 miles and 67 mpge city/highway/combined. The automaker says the Marai’s performance fully competes with traditional internal combustion engines but uses no gasoline. With a refueling time of approximately five minutes, the Mirai creates electricity using hydrogen, oxygen and a fuel cell, and emits nothing but water vapor in the process.

Toyota says it continues its work to build a hydrogen society and remains committed to supporting the development of a hydrogen refueling network. According to the company, over 30 retail hydrogen stations are now open for business in California, with an additional 12 stations projected to open in California in 2018. Toyota continues to partner with FirstElement Fuels and Shell to support the creation of a broad network of hydrogen infrastructure in the Golden State. Toyota is also collaborating with Air Liquide, a producer of industrial gases, to set up a network of 12 hydrogen fueling stations stretching from New York to Boston, with the first station expected to launch in Boston later this year.

In addition, Toyota is building a new Tri-Gen facility at the Port of Long Beach that will use bio-waste sourced from California’s agricultural industry to generate water, electricity and hydrogen. The hydrogen will fuel all Toyota fuel cell vehicles moving through the port, including new deliveries of the Mirai sedan and Toyota’s Heavy Duty hydrogen fuel cell Class 8 truck, known as Project Portal. Looking ahead, Toyota has also established a range of partnerships with both private and public entities, as well as academic institutions, to further accelerate its vision of a hydrogen-based future.