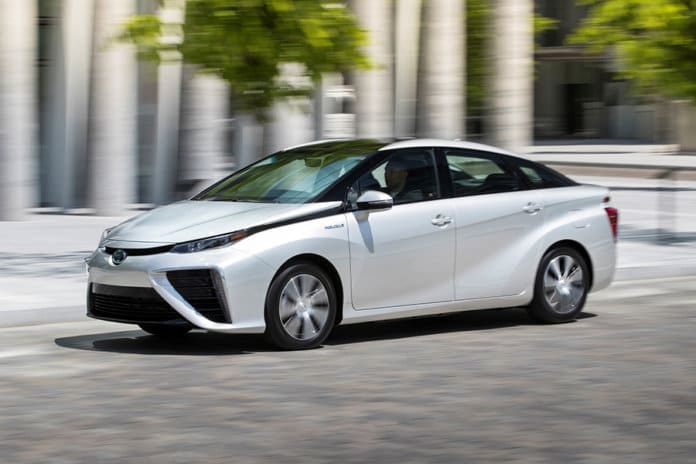 Toyota has announced that Mirai, the auto company’s fuel cell electric vehicles often seen refueling at hydrogen stations in California, will be available for sale up north in Canada for the first time this year.

As Toyota kicked off its participation in the Montreal International Auto Show, the company confirmed it would launch the Mirai starting with select fleets in Quebec, where Toyota says the Mirai will take advantage of the province’s hydroelectric power generation to offer drivers an even cleaner, more sustainable alternative to the conventional automobile.

“Toyota is passionate about helping Canada and societies around the world enjoy a greener future – as we have outlined in our Environmental Challenge 2050. And the Mirai – a zero-emissions, production-model sedan – is an important milestone as we work to achieve this,” says Martin Gilbert, director of sales planning and innovation at Toyota Canada Inc. “Working closely with the Quebec government and key stakeholders, we feel the time is right to put Mirai on the road in the province.”

“Quebec is well positioned to become a world leader in terms of energy transition, a challenge for all modern economies,” says Pierre Moreau, Quebec’s minister of energy and natural resources. “This challenge cannot be solved alone; it’s by building strategic partnerships with companies like Toyota, which today launches the Mirai, a fuel cell electric vehicle, that we will succeed.”

“The arrival of the Mirai in Quebec is perfectly in line with the adoption of the zero-emission vehicle standard last December, which aims to substantially increase the number of electric cars on Quebec roads,” adds Isabelle Melançon, minister of sustainable development, the environment and the fight against climate change. “This standard will give Quebecers access to a wider range of electric vehicles or plug-in hybrids. Toyota’s announcement demonstrates that builders are hard at work to meet the greenhouse-gas reduction targets we collectively set for the benefit of our planet and future generations.”

According to Toyota, the Mirai’s introduction in Quebec follows the successful market launch of the Toyota Prius Prime plug-in hybrid vehicle. The company launched a real-world market trial of Prius Prime in the province in mid-2017, setting the stage for expanding Prius Prime to the rest of Canada this year.

Of course, Mirai needs a source of hydrogen, and because utility Hydro-Quebec is among the world’s largest producers of hydroelectricity, Toyota claims that means the hydrogen used to drive Mirai will be produced from remarkably clean sources, too. The company says Toyota Canada has been working closely with partners in Quebec over the past year – in particular, the ministries of energy, environment, and transportation – to work on the introduction of an appropriate fueling infrastructure in the province.

The 2018 Toyota Mirai can travel more than 500 km (approximately 310 miles) on a tank of hydrogen, helping to alleviate range anxiety. Toyota says refueling time is similar to a regular gasoline vehicle, taking approximately five minutes to refill the tank. In addition, the Mirai has proven cold-weather reliability – especially important as many parts of Canada have experienced new, record-cold temperatures this winter, the company adds.

Mirai stores hydrogen in its fuel tank. This is combined with oxygen in the fuel cell stack. The resulting chemical reaction produces two things: electricity and water. Toyota says the electricity powers the vehicle, delivering 151 peak horsepower and up to 247 lb-ft of torque, and the water leaves through the tailpipe as Mirai’s only emission.

The company did not disclose more specifics, including the potential sales price for the Mirai in Quebec.

You need to talk to real owners of the Toyota Mirai to get an idea about how bad the hydrogen fuel infrastructure is today. They may be improving the technology, but there are way too many cars on the road for the number and fuel filling ability of the stations. It routinely takes me over 20 minutes to fill my tank due to how many cars are in line to get fuel. I have seen lines of 5 to 10 cars trying to get fuel. The system to tell us which stations have fuel is almost worthless. Dozens of times… Read more »